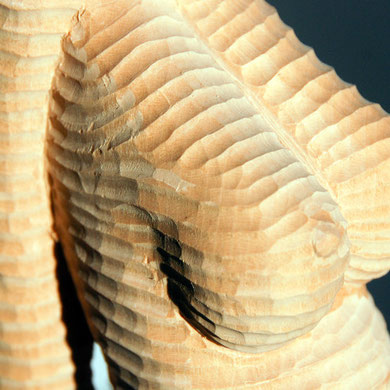 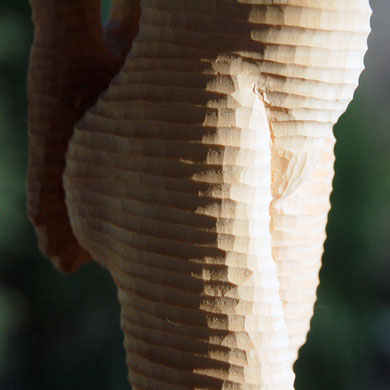 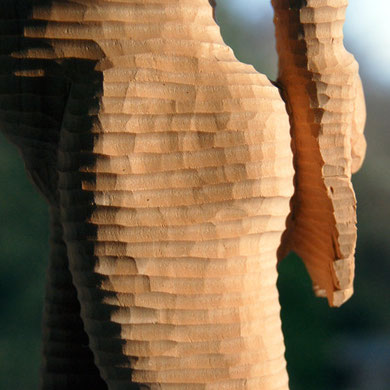 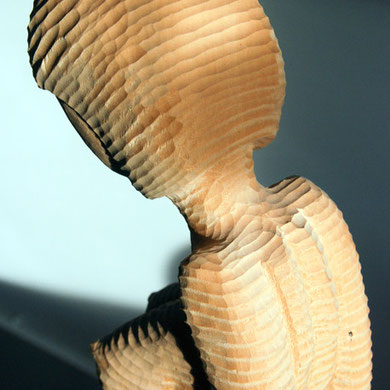 I began Standing Woman on July 16th 2009. The piece was inspired by a photograph. I found the pose sexy in a demur, self-effacing and yet quietly confident way. I loved the swing of the woman’s stomach, the weight of her hung head and the equilibrium of opposed forces that allowed her to make the pose look relaxed, heavy, poised, nonchalant.

Two weeks into the piece and I wrote – sardonically – ‘The work has a physical intensity the he finds exhausting. By the end of the day he is running on fumes.’ Not only that but I was using myself as a model to work out what happened in thee dimensions behind the photo.  And then disaster struck as I was working on the legs.  Suddenly one had become too thin at the knee.

I was very despondent. My sketchbook at the time was full of possible courses of action. My heart hoping that the withered knee was not really noticeable – my head knowing that it was. In the end I cut the knee out and stuck a new piece of wood in. Miraculously, it more or less worked.

I left surface of the piece in a calculately rough state because lime wood, although easy to carve, has very little character.  There is a great book on the Limewood Sculptors of Renaissance Germany by Michael Baxendale.  In it he describes how lime trees had particularly magico-religious associations in the medieval world. They were festooned with votive tablets against the plague. Lime groves were visited as holy places. And pregnant women in Upper Bavaria ate lime seeds and the leaves and the bark were applied to the body for strength and beauty.

I finished Standing Woman six weeks after starting with barely a let-up.