The next morning  I gathered up my gear and launched the Fiesta onto the motorway for Limasol. At 8.30 the traffic was not too intense and I was soon on my way south. The day was bright but cloudy and blissfully cool. I was not sure where I was headed and after 20 minutes of motorway driving I got restless to be on smaller country roads and turned off at the foothills from the south-eastern corner of the Troodos which forced the motorway up into a series of increasingly dry-country rises and swoops.

I turned under the motorway and headed towards a little place called Kornos (‘clay’ in Cypriot dialect). It was immediately much more interesting. Small fields of wheat and barley, olive trees, and hardly a car about. I was through Kornos in a flash and headed to Delikipos. At a certain point there were signs for walks and parking. I pulled up a steep incline to the right and continued up the road. It brought me to a higgledy-piggedly farmyard and a sign for Lythrodontas up an ‘earth road’ as they are called on the signs. I thought, ‘What the heck’ and headed up the road.

I was quickly into sparse, stunted pinelands – it wasn’t thick enough to call it a forest. I passed a snake that had been caught on the road. I walked back to investigate and take a picture. It was pretty gruesome, the poor thing half alive and trying to arch its way off the tarmac. I took a picture and backed the car over it to put it out of its misery. I think it may have been a poisonous Montpellier snake (Malpolon monspessulanus) but I am not sure. May it rest in peace.

As the road surface gave way to the graded shaley earth a big army lorry roared towards me. Maybe this is what had done for the snake. It was dry barren looking country, with little growing beneath the sparse and broken canopy cover. Some of the pines got to a decent size. I ambled along taking it easy over the rough surface, particularly where it cut into rocky bluffs. A pickup came belting past me raising a cloud of dust. But otherwise it was a peaceful drive.

After a few km I came to a village, Lythrodontas, with a narrow winding main street between a few dusty shops and tavernas. Some new building was in evidence but the village seemed a million miles away from the suburban frenzy between Nicosia and Larnaka. As I left a brown tourist sign pointed confidently to Marcharais Monastery 16 km distant. I followed the road hoping it might not turn into the dirt road shown on my map. But it did.

The increasingly steep hills were criss-crossed by wide brakes in the sparse forest which reminded me of tank training areas I had seen on Salisbury Plain in the UK. I switch-backed my way through the area as the large radar site on the top of 1,423m Mount Kionia dominated the area.

The road climbed steadily up over 600m until I came across a pleasant pine-shaded picnic spot (Platania Forest Station) where the tarmac road recommenced. These picnic areas must be an absolute Godsend to teachers looking for somewhere to take their charges in the unremitting heat of summer.

A coach-load of uniformed school kids were playing under the trees and being told what to do by a woman with a prim English accent. I pushed along, past two fire trucks and a sign saying the fire risk was 'very high'. The road now literally snaked along climbing higher through the woodland: views back across the Mesaoria to the Kyrenian Hills broke out. The skies darkened and a shower of big raindrops fell.

I pulled up at a little wayside Byzantine church, which it turned out is dedicated to Saint Onoufrios – who lived out his life in the Egyptian desert clothed in woven twigs and luxurious white body hair in the 4th century AD according to the information in the porch. The church itself, built on the site of a 15th century monastery, was built in 1730. Swallows were bringing up their young in the porch and a nearby tree was blossoming with flowers that looked like saffron and which I think was an Machairas Monastery, although quite what it was doing high in the Troodos is anyone's guess.

I poked my head inside and took a quick picture and pushed on. The church was beautifully lit by natural light once the brief shower had passed. The altar screen – témblon – with its ornate relief carving displayed eight icons. The triangular sections – pendentives - rising up to the dome were painted in bright colours and maybe represented the Four Evangelists.

I’m not a great one for churches but I could imagine how comforting the sumptuous richness of this little church could be to local parishioners or passers-by, particularly when contrasted with the harsh and increasingly vertiginous terrain outside.

It took a picture of some bright purple thistle flowers in a patch of the wild oat grasses that is characteristic of much of Cyprus and drove on, ever upwards. I passed a flock of goats grazing through the forest and stopped to take a picture of the ubiquitous pinky-mauve rock roses that were in bloom.

Thubron (Journey into Cyprus) claims that the rock rose (Cistus creticus) was a source of myrrh and quotes Herodotus who wrote that the sweet smelling gum was combed out of the beards of goats that had been browsing the bushes. Others say that an aromatic and medicinal resin, 'labdanum' was extracted from it. (Sfikas, 1994 Wild Flowers of Cyprus p.122.) Rock rose may have been a source of myrrh but its main source was the Commiphora myrrha which grows on the Arabian peninsula and in Ethiopia, Eritrea and Somalia.

But it is a nice, if malodourous, idea to think that the goats I saw grazing were inadvertently collecting myrrh.

Labdanum was used in Ancient Egypt to hold together the false goat hair beards worn by the pharaohs. The resin was also used to treat colds, coughs, menstrual problems and rheumatism. It was collected by shepherds in Crete with a kind of leather-tongued rake (See Labdanum).

I passed the sign for the Machairas Monastery and took the spectacular road cut into the very steep side of the Kionia peak. This led to a ‘View Poind’ (sic) and a wishing bush covered in scraps of cloth and plastic with fabulous views towards Nicosia and the Kyrenian Hills. The wind soughed gently in the pines, the air full of a heady spice fragrance that smelled like an exotic curry. The perfume came from a spidery grey plant growing amongst the trees and along the roadside. Down below I could hear Pied Wheatears chattering away and an intriguing call call I could not identify.

Apart from the Pied Wheatears the bird life was thin on the ground. I had seen jays and a single magpie on the way up. A little plant with purple and cream fluted flowers  grew in the sharp shale of the view point. This is the endemic Cyprus Skullcap (Cyprus Scutellaria cypria var. cypria) 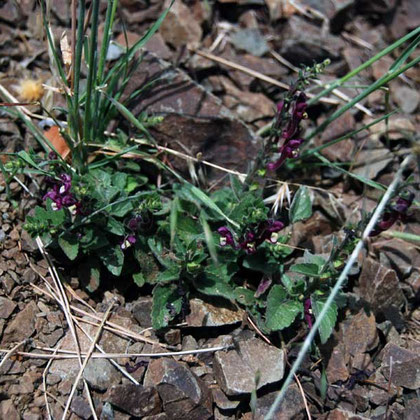 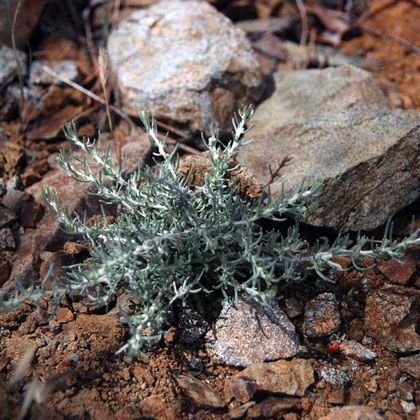 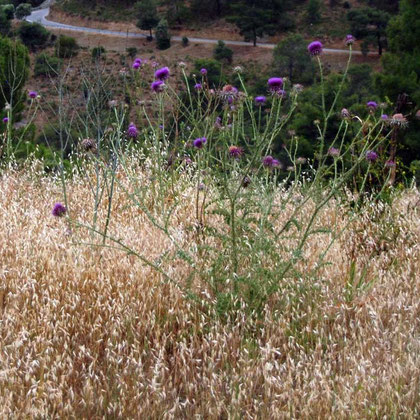 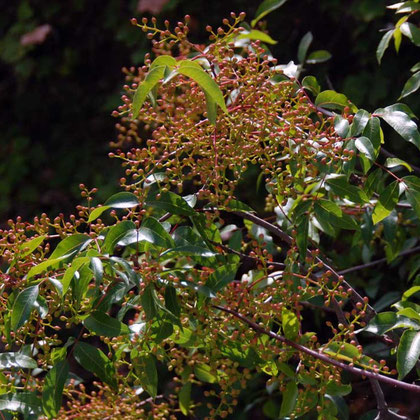 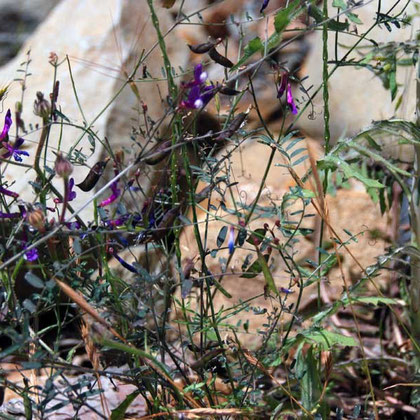 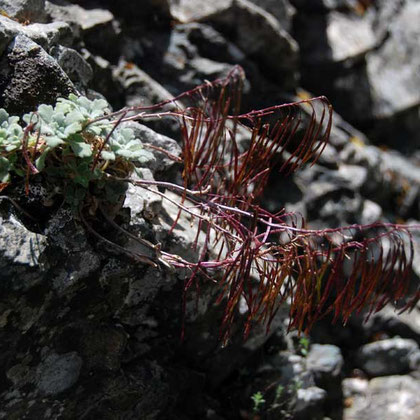 The barren hills to the south were almost bare of vegetation. Trees grew in the gullies between shining grey rock and in one I could make out ancient terracing at maybe 800m. I wondered if these terraces had been used to cultivate a crop way up here, taking advantage of the water that may have run down the gully in wetter times.

I drove back down the cliff-side road, stopping to try and catch the wheatears on camera to no effect. I pretty much had the roads to myself, but for the occasional coach heading for the monastery. This was just as well as there was a good accumulation of rockfall on the mountain-side of the road.

I turned left down the steep twisting road to the Machairas Monastery. Just before it a road to the right indicated a Nature Walk at 1km. I followed it and quickly tired of the descent, turning round and parking at the junction. I slipped through a gateway next to a domed chapel to be confronted by a massive bronze cast of a sculpted EOKA fighter in full battle dress and eagle looking out defiantly across the valleys and hills to Kyrenia and the ‘occupied North’. House martins were swarming around him catching insects on the updraughts.

An inscription on the back suggested this was raised in 1992 - during a period of revived Hellenistic fervour. It commemorates Grigorios Afxentiou, second in command of the pro-Greek, anti-leftist and anti-British-occupation armed group, EOKA, led by the notorious George Grivas. Afxentiou was killed on March 3, 1957 in his hideout beneath the monastery after refusing the offer of surrender and killing Corporal Peter Brown.  Using aviation fuel - the petrol the troops had would not ignite due to the pouring rain - and an explosive charge Afxentiou met his end in the hideout. A colleague who had initially surrendered and been allowed to return into the hideout to persuade Afxentiou to surrender survived. There is a ceremony each year and, not surprisingly,  ‘British subjects are explicitly not welcome’ (Rough Guide, p.237).

A strange follow-up is claimed to have occurred when the sculptor, Nikos Kotziamanis, who made the memorial tried to show his work in an exhibition in Newark, Nottinghamshire.  The local British Legion objected  and the show was cancelled.  Alan Meale, a Labour MP then claimed the Turkish Embassy had engineered the row 'until it emerged that he was associated with the nationalist Greek-Cypriot Brotherhood.' (For the details ofthe death of Afxentiou see N. Van der Bijl, The Cyprus Emergency, 2010 pp. 130-2.)

For a view of Kotziamanis's project to erect a 30m high, €40m sculpture of the Colossus of Rhodes and his thoughts on the mooted displacement of his statue of Archbishop Makarios III from central Nicosia to Kykkos Monastery see Max Sheridan.

The Orthodox church in Cyprus retreated to the Troodos at the end of the Byzantine Empire.  The Frankish knights of the Lusignan period in the 12th century brought catholicism to the island and undertook a major Gothic church building programme. Colin Thubron argues that from this time, "the [Orthodox] Church has stood sentry to the nation's spirit and its leaders have been spokesmen of the people." (Journey into Cyprus p.93)

Whether one agrees or disagrees with him, you have to admire the elan of Thubron's style.  Later he returns to the character of the Cypriot, learned through his reading and four month walking tour of the island.

The Cypriots, I rather think, were natural members of this dazzling hybrid, Byzantium.  They, like it, lay midway between the classical and the oriental.  Their softeness and conservatism were not Hellenic.  To them the character of the Greek mainland was unsympathetically masculine, and all through the medieval years the Cypriot nobles continued to send their sons for education to Constantinople, which they felt to be their mother-city. p.102 Journey into Cyprus

I did not want to see the monastery and drove on, following the road down hill. At a steep corner the road bridged a small ravine. I stopped and got out to hear the sound of water running. I clambered down a steep bank to the stream, making its way around boulders and into small pools. As I moved slowly up the river I could hear frogs plopping into the water but could not see them. After thirty metres I came to a small waterfall and retraced my steps. I took a picture of one of the pools hoping I might find a frog in the photograph even though I could not see one. I did! 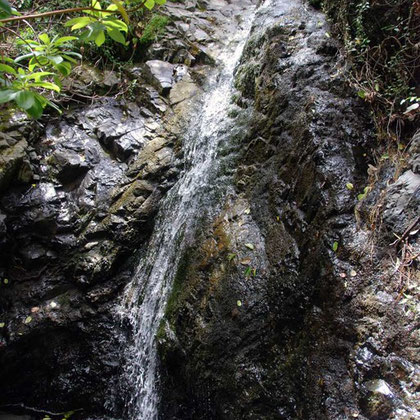 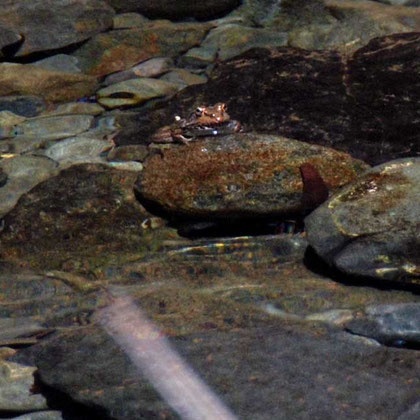