After my walk around Peristerona and my visit to the Asinou church and forest trail I decided to make a dash for the Xeros valley to the west of Astromeritis to see how it was looking after the abundant rainfall and snow.

In my trusty Suzuki Splash I climbed the long incline from the junction with the E908 up to the shoulder that gives a spectacular view across the Xeros to the thinly-forested hills of Tillaria. I had forgotten just what an awe-inspiring spot this is: the valley side dropping away vertiginously, the wind soughing in the replanted Brutia pine stands, the clouds seeming to well-up from the very peaks of Tillaria themselves, the tortuous curves of the road to Kato Pyrgos climbing away into the far western distance.  And all the time with the proximity of the Green Line, the views to the north down into the TRNC and away to the great sweep of Morphou Bay, the studded military posts of the Greek Cypriot National Guard and the Turkish Army, separated by wilderness and the forlorn and vulnerable outposts of the UNFICYP.

Since the junction with the E908 I had not seen a car.  There was an old white Ford Transit pulled into a make-shift lay-by but I could see no sign of the driver.

Other than the silence and the steeply descending road I was about to take the other thing that struck was the greens in the valley and on the moutnain spurs.  This was not the lush, overpowering grass-green of the Mesaoria wheat and barley fields pumped-up on nitrates.  But a more subtle, mossy green, thin and stretched, tentative over the barreness of the crumbling, tumbling steep valley sides.

The north sides of the spur showed the greatest signs of rejuvenation, maybe because these are protected from the greatest heat of the sun.

Time was pressing as I tried to cram as many views, pictures, miles, experiences into each of the four precious days of this trip. I clambered back into the car, then got out again to locate the ignition key, put my camera on the passenger seat, belted myself in and started the long descent.

It is a beautifully engineered road, cut into the multiple spurs of the valley side, but the cuttings tower above you, and the litter of fallen rock on the road and the nearside bank induces a certain nervousness, a certain desire to keep going without taking too many pictures, particularly after heavy frosts and snow.

The long last run down to the bridge at the valley floor is a relief and the bridge - a modern conrete affair that is surprisingly wide, is like a sigh, a pause, a place to draw breath before the arduous ascent and countless switchbacks that rise over the opposite shoulder to skirt around and down into the Limnitis valley with its big stand of plane trees before climbing once more before the long descent into the Pyrgos valley and the eventual, intoxicating, opening out, debouchement - uncorking - into orange and mandarin and avacado groves and the beautiful, refreshing sea.

I parked up on the bridge, there still being no traffic, and marvelled at the water in the river bed that had been dry as a bone when I visited the previous June.

I was so pleased to see this water and the verdant, abundant growth on the valley's narrow flood plain. The flow was not a cataract but it was good enough for me. I moved the car over into a little stony lay-by, noted the sign on the downstream side of the bridge telling me I was about to enter Turkish occupied territory and scambled down under the bridge.

When we had stopped here in June 2012 even at this altitude - between 200m and 300m - the heat had been unbearable.  In Nicosia is was 40C and it was not much less.  The shadow underneath the bridge gave us a temporary respite but we soon pushed on as it was only getting hotter.

Today it was in the 12-14C range and extremely pleasant, although not a place to be stranded for the night. I walked a little way up the valley, clambering around a little cliff in the accumulated layers of wash and gravel.

It was funny how the Cyprus Plane trees gave the place a slightly murnful air. I was reminded of cold, dark London streets and the onset of winter.  But here the trees held onto to their golden ochre leaves, which were incongruous against the riotous green of the valley grasses.

A clod-hopped around the big stones of the river-bed and came across a rough sandstone boulder with strange marks in it that looked like little craters. I broke a piece off, the stone hammering echoing in the silence and making me think of nearby Turkish troops.  I slipped the piece in my pocket, a earthy green-yellow fragment of the island's fantastic geology.

Clambering back to the car I nearly trod on an exquisite plant, perfect in its form, growing out of the river gravel.I've had a quick look around on the internet and in my flower book but I have not been able to identify this plant. I did see that there is an endangered endemic Erysimum kykkoticum that only grows in the Xeros valley but I don't think this is it (for more see here).

I didn't hang around too long in the valley as the day was short and time was pressing. I drove back up the valley side, stopping to take some phots of the river winding its way between the interlocking spurs of the valley.

I kept a sharp eye out for the Mouflon which are reputed to be in this area but with no luck. All I saw was the road sign!

As I drove up out of the valley the white Transit I had seen parked-up earlier came roaring down the road in the direction of Katos Pyrgos.

I hatened back to Nicosia past a huge new damn that is being built, the massive slag heaps of the Skouriotissa copper mine and Peristerona. I got caught up in rush hour traffic and arrived weary back at the hotel as the night sky darkened. 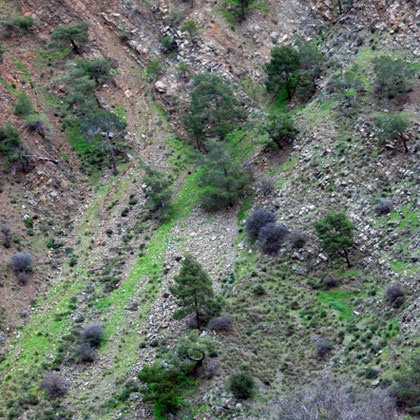 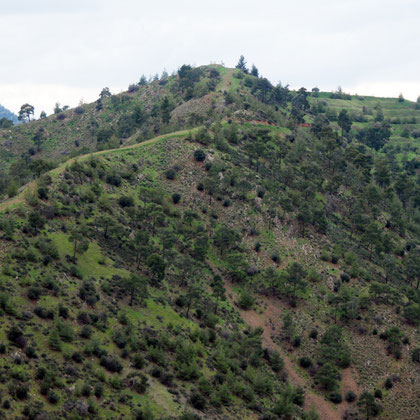 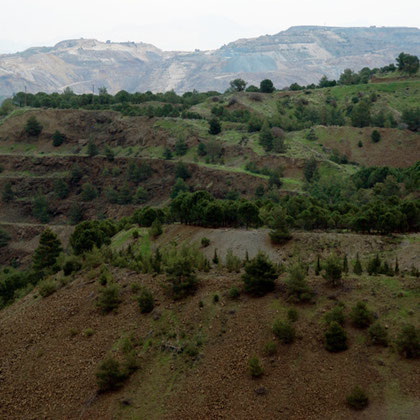 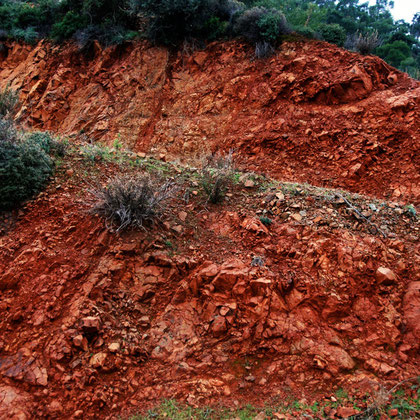 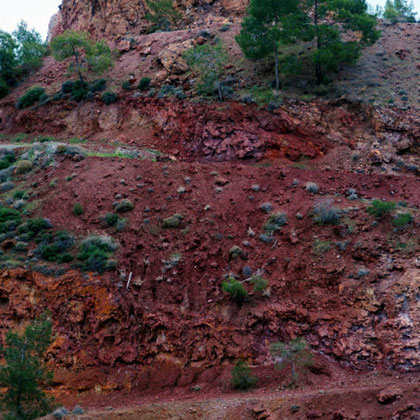 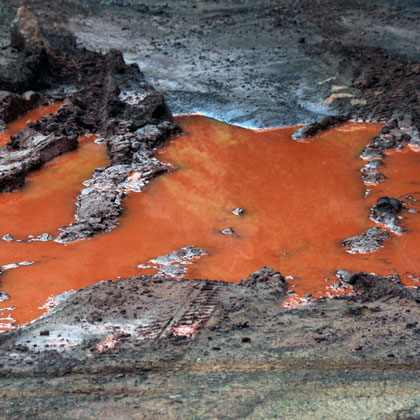 Video about the Cyprus Wheatear - the national bird of Cyprus

To Mountains VI: Kornos to Machairas