I never really get it when I travel which way the clocks have moved and what that means. I just seem to feel tired and not sleep whatever. But my first morning in Cyprus started with the sun pushing up under the heavy curtains.

After breakfast we decided on a walk into Old Town Nicosia.

The main road down into the town – Archbishop Makarios III Avenue - was busy. The hill descends past low rise office blocks with a preponderance of airlines on the left – Emirates, Jordan, Bulgarian Air - and wedding dress shops on the right. When the air is clear there are spectacular views of the distant Kyrenian hills.  There were also a lot of banks.

At a big junction, a church - Agios Spyridon - was tucked away in a patch of unkempt grass on the left.  Debenhams was  straight on, a filling station to the right, and a proper shopping street beyond. In the near distance the low-rise towers of Deloitte, PwC, and other consultancy firms jostled for a place in the busy Nicosia financial services market.


Across the intersection there was M&S and Zara, Costa coffee and the Body Shop. It was 10.00 am and the street was quiet. The unevenness and dislevels of the pavements were a liability but the street was spick and span.

(Later that day I was walking along a backstreet and saw a suited bloke on his mobile fall sideways down a short slope of pavement and crash spectacularly to the ground. He got himself up, looked around cautiously to check to see no-one had seen him tumble, while keeping up his conversation on the mobile.)

The city was ranked in 2012 as the 5th richest city (up from 1oth in 2011) in the world in relative purchasing power.


Further north the road veered to the west as traffic prepared to skirt the Old Town. We passed bus stops where a multi-ethnic mix of people were waiting for their rides – African men, Chinese women. Soon we were walking across one of the raised streets that crosses the old free fire zone/dry mote in front of the Venetian walls that circle the Old Town with their eleven bastions.

In a short while we had come across blue oil drum barricades, 'no photography' signs, and Greek Cypriot soldiers with guns. We were at the Green Line.

It may not be the Berlin Wall but the Green Line has the feel of a haphazard battle zone, where the fighting has paused rather than definitively finished. It was strange to see the makeshift poured-concrete gun positions as a fall back, with shuttered gun slits. Like a kind of jerry-built, do-it-yourself war. The soldiers lookouts look improvised where they stare out across into the dead zone between the partitioned island.

We followed the frontier zone to the west passing the Papal Nuncio’s office and the Maronite Church and Social Centre (vital for the Maronite villages out on the Karpas peninsula on the other side of the Green Line). We came up to the Kasteliótissa Medieval Hall that was closed and then out into the choking traffic moving round the outside of the wall.

The guidebooks say that the Old Town is quiet by day and eerie and deserted at night. I could believe it.  But then nothing really prepares you for the atmosphere of Old Nicosia.

By working are way along the Green Line we came to the smartened-up pedestrian street of Lidras, once infamously known as 'Murder Mile' where Greek Cypriot gunmen fighting for independence and 'enosis' (unification with Greece) picked off members of the occupying British administration.


We decided to cross into Northern Nicosia –  the area of 'Turkish Occupation' as it is referred to by Greek Cypriots or by others as the  de facto - but internationally shunned - Turkish Republic of North Cyprus (TRNC).

The Locmaci crossing point was only opened on April 3rd, 2008. Previously it had been a place of regular stand-offs and taunting matches between Greek Cypriot and Turkish troops.  The stoney-faced, black-uniformed border police scanned our passports, stamped a visa 'valid for 90 days' and waved us away. We crossed the buffer zone and slipped by three more black-clad border police. They cared not to acknowledge us and we walked through.

People say the crossing has become more relaxed but if this was relaxed you got a sense of what ‘tense’ might be like.

North Nicosia starts with a jumble of cafes and narrow streets packed with shops selling jeans. With a map picked up at the border we tried to follow the 'City trail'. This was poorly waymarked and although some people say the nice thing about Nicosia is that you can’t get lost I found it surprisingly easy and disconcerting. It wasn’t so much the being lost, but being lost in the eerie, falling down streets of the Old Town that got to me over the next few days. I wasn’t exactly scared and I didn’t feel threatened, but the place reverberates with unhealed trauma and abandonment.

We soon came to the Buyuk Han, the ‘Great Inn’ or caravanserai built by the Ottomans in 1572.

The Buyuk Han was briefly used as a prison by the British and has recently undergone a 10 year restoration. The Great Inn forms a large courtyard with double portico-ed inner walls and four gates. In the centre a small mescit – the Turkish equivalent of a chapel – stands perched over its own ablutions fountain.

The Inn has apparently been a commercial success with artisan shops on the top storey. It was very quiet in February 2011 when we were there with most shops closed and a group of older guys sitting in the sun at the little café on the ground floor.

We continued on our walk past Selimiye Mosque – the converted 13th century Lusignan Roman Catholic cathedral of Ayía Sofía on which the Ottoman’s vented their fury when they took the city in 1570. Two fifty metre high minarets were added to the stripped and white-washed body of the church – these can be seen from many parts of South Nicosia.

There is a peaceful square behind the Selimiye and on one of the adjoining streets stands the Lapidary Museum. This little museum housed in Lusignan-era pilgrim hostel contains an interesting collection of carved stone from different eras. The museum was staffed by a guy struggling to stay warm over a bashed old electric heater.

We walked on through increasingly run down streets as we got back near the Green Line. There were lots of boys out playing who were oblivious to us. As we got nearer the Line the streets were rubbish strewn and uncared for – on one cul de sac we came across a workshop where men were making rush-seated kitchen chairs – an old skill brought over by Turkmen nomads who formed part of the 30,000 plus plantation of Turks into Cyprus after Ottoman rule was established in 1571 (Rough Guide p.380).


We eventually worked our way round to the northern section of the Venetian city walls and the stately building of the Kyrenian Gate. We saw very few people, and them mainly children, and no other tourists.

It was a bizarre and unsettling experience. I had read that Nicosia was ‘gritty’ but this was ‘gritty’ in spades. I was reminded of the kind of abandonment you find in US cities where whole neighbourhoods have just been left to decay. The state of large swathes of both sides of the Old Town speaks eloquently to the horror and continued trauma of partition.

(One of the most contentious aspects of the Turkish army’s occupation of Northern Cyprus has been the wholesale transfer of poor settlers from the Turkish mainland to the North. There are no official figures for numbers but authoritative sources quote between 130,000 and 230,000 which ‘certainly outnumbers’ Turkish Cypriots. Add to this the continued presence of 45,000 Turkish troops in the ‘TRNC’. See Paley, C. 2010, Must History Repeat Itself by Duplicating Earlier Mistakes in the 60-year long Negotiations about Cyprus’s Future, Cyprus Center for European and International Affairs, Nicosia , p21 and 23.

See also The Financial Times for a very useful article where,

figures indicate that there are now slightly more Turkish-origin people' - as they are officially known - living in north Cyprus than indigenous Turkish Cypriots in a permanant population of 250,000.

The migrants rent space in the dilapidated Ottoman mansions of Nicosia's old city. Formerly grand Turkish Cypriot residences, they are now semi-derelict, their owners having moved to modern homes in the suburbs. 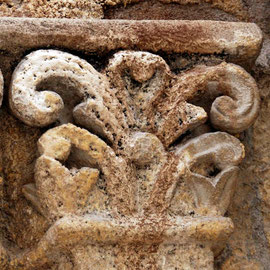 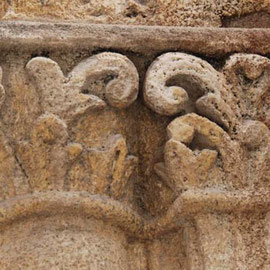 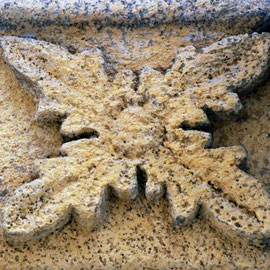 This was the Armenian quarter from the tenth century until the Armenian community was forced out in 1963 for allegedly siding with the Greek Cypriots. There is supposed to be an impressive Armenian church, which was literally under wraps for restoration, but if the carving on the gateway is anything to go by it should be magnificent when restored.

In this part of town the City trail made an appearance as a short-lived blue painted line on the ground. But just as soon it had appeared it was gone and we were back looking at bleak tumbledown houses and bullet-riddled buildings forlorn in the Buffer Zone.

We walked down through the main street of the old town, where there were taxi drivers waiting around for fares. The only uplifting part of the town was the Arabahmet district which is undergoing a thorough refurbishment under the joint North-South Masterplan, backed by the EU, the US and the UN. Here there are grand Ottoman townhouses with painted wood upper floor balconies, grand doorways with impressive carved stone surrounds and narrow side streets with restored and whitewashed single storey houses. 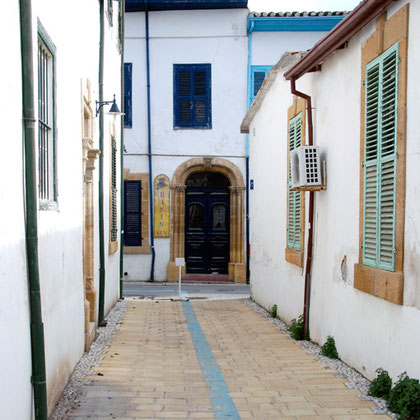 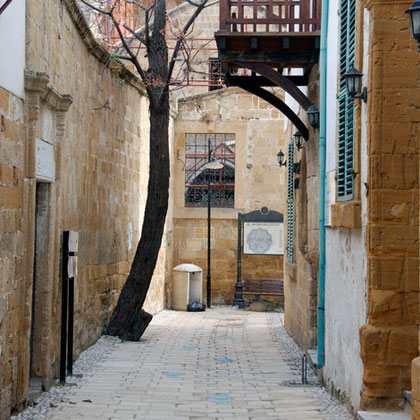 We hurried back, tired now, into Southern Nicosia, with the rigmarole of getting our ‘visas’ stamped. Hungry we scoured the streets of the touristy – although we saw none save us – ‘Folk Neighbourhood’ – (Laíka Yitoniá) – for something to eat without fried eggs or chips.

Most places looked closed up or were doing a good pretence. Eventually we asked the guys at a nice looking Lebanese place – doing a modest trade in hubble-bubbles – if they were open. We made the mistake of sitting in the frigid interior, rather than outside with a patio heater. Al Jazeera was on the telly reporting on the the unfolding Arab Spring in Egypt. The food was delicious – Beiruti Houmus, Baba Ganoush and a fantastic olive salad with steaming flat breads. Much restored we staggered back up the hill to the hotel.

Later that day I rolled my sore feet back down the hill to visit the Moufflon Bookstore – which Marc Dubin in the Cyprus Rough Guide claims is the best in the Middle East. It was interesting, with a good collection of English language books on Cyprus’ antiquities. The owner was kind, welcoming and afflicted with a desperate cough. On my way back to the hotel I stopped in at one of the Debenhams that promised 'Further Sale Reductions' on Makarios  Avenue. The assistant didn’t get my quip about coming all the way from London to buy socks in Nicosia.