The West Coast National Park, near the seaside town of Langebaan, is an hour's drive (100km) north of Cape Town. The road goes through Cape Town coastal suburbs and then empties out as windswept sands from the coast create a dry, scrubby landscape. The road is arrow-straight and fast, rolling over waves of scrub with private game reserves and a Cultural Centre of the San people. At one point, travelling at 80 mph, we suddenly saw a giraffe's head emerge over a brow of one of the flat hills.

There were a lot of big flashy but dead serious 4x4s on the road, looking like they had come down from Namibia (although it's actually a 1,275km - 11 hour - run to Windhoek the capital.)  I got into the hang of pulling over across the yellow-lined 'passing lane' but you've got to look lively because there will suddenly be someone walking down the road in the lane, or there will be sand-bagged roadworks signs, or side-roads where it would be all too easy to careen into a waiting car.

The town of Langebaan is a pretty horrible modern sprawl of very recently built weekend places and the obligatory township on the road out of town. So best to take the first entrance to the park that completely avoids the town. The journey back to Cape Town affords the most spectacular views of Table Mountain.

We went to Langebaan on a Sunday in April but there were very few cars about. The first part of the park is a continuation of the low rolling hills of sandy scrub.  In places these break out into dazzling white dunes although I seem to have contrived not to get a picture of them.

We headed down to the foot of the lagoon and one of the bird hides.  This is located on poles out at the edge of the lagoon and there is a beautiful boardwalk through the brackish pools and mats of succulents turning spectacular autumnal colours. 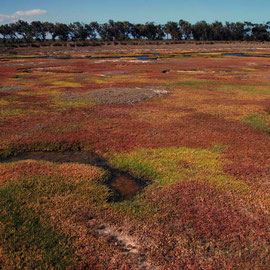 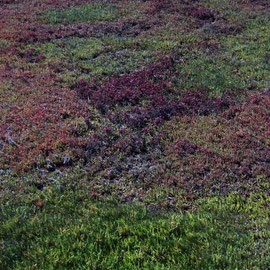 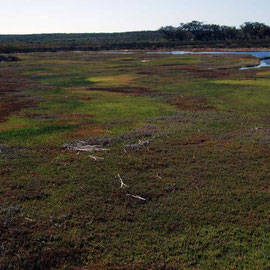 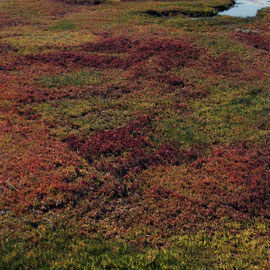 We walked out along the board walk to the bird hide. A display inside showed the incredible migratory flights made by knot, sanderling, and sandpiper curlew from the lagoon to Siberia.  The tide was falling and we could see birds that would have looked familiar in the UK but for the haze of flamingo pink. (For more on the decline of the migrant wader population and the international importance of the lagoon see my Langebaan Lagoon.)

It was a stunning place and we had the hide all to ourselves, although a cool south easterly was blowing through the slats and after our early start breakfast was on our minds. So we made our way to the Geelbek Visitor Centre, housed in a substantial farmstead.

The Geelbek Centre stands at the foot of the lagoon that eventually becomes Saldanha Bay. This was an important centre for the Dutch East India Company in the 17th century.  It was used for repairing and watering the company's ships and its abundant waters provided plentiful dried fish to feed the slave labour force on the Cape.  At one time 700 Cape Gannets were plucked for their down to fill cushions and feather beds at the Cape. The Bay now has a 990m long jetty and two iron ore berths at its northern end.

The Geelbek centre was originally a loan farm and used for various agricultural activities but the soils around it are fragile and barren.  In the early 20th century it was owned by the Governor General of the Cape Colony, Henry de Villiers Steytler, whose workforce bred mules for the British army.  Steytler had the lagoon dredged to allow boats to come closer to the homestead for his famous parties, which lasted for weeks.

The Centre is now a restaurant and a wedding venue. It's been tastefully restored and maintains its Cape Dutch charm, along with its Slave Bell.  We had our breakfast under one of the many slightly ramshackle awnings outside. The whole place had a threateningly desolate end-of-season air to it.

Such was our hurry to get on and see the rest of the park we didn't visit Eve's footprint, which was discovered in 1997 nearby and is believed to be the oldest known footprint of modern humans, dating back 117,000 years.

We admired the cottage at Abrahamskraal in its splendid isolation and were relieved that we had not rented it sight-unseen.  We then drove north along a thin spit of ridge seperating the Atlantic Ocean from the lagoon, stopping at the Atlantic View Point.

As we turned one of the many corners heads emerged out of the shoulder-high fynbos and we were face-to-face with a herd of Eland, so often depicted in San rock paintings.

At the viewpoint, which we luckily had to ourselves, the  wind was whipping along the ridge from the south east, and the surf on the distant beach was tremedous. As we took the scene in a distant bird began to glide towards us using the upcurrents of the ridge.  A picnic table with a reed canopy was close by and we slipped under its shadow. The bird continued majestic on the wind. 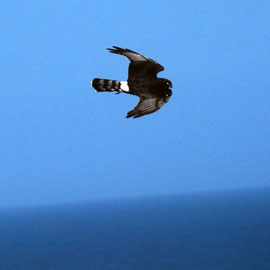 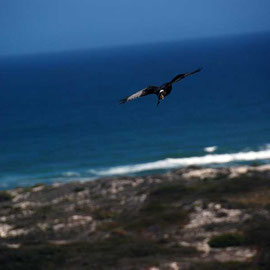 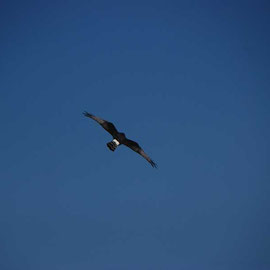 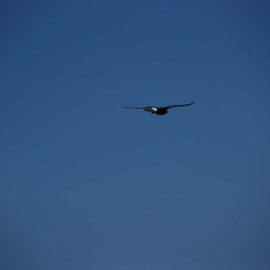 It was a Black Harrier, one of just 1,000 breeding pairs in the world and it flew by with a nonchalance that was breathtaking; its searching yellow eye holding us for a moment.

We rejoined the gravelled road and continued with spectacular views of the lagoon to our right and a bleak vista over a sandy waste to the Atlantic.

The West Coast National Park is predominantly a 'strandveld' Fynbos on the Langebaan Peninsula to the west of the lagoon. There are sections of Saldanha Limestone and Granite strandveld fynbos to the east.  'Strandveld' as opposed to 'Sand Fynbos' because here the sands have been relatively recently deposited and leaching has not yet had a chance to rob them of their calcium.

Succulents  of a sub-tropical and desert (Karoo) character begin to predominate in the strandveld and fire plays a lesser role than in the Peninsula Sandstone Fynbos. 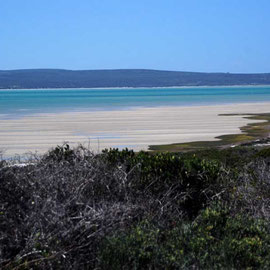 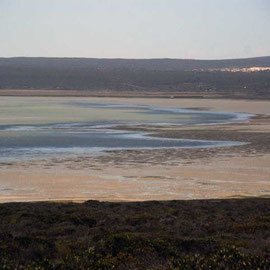 We came across a covey of Cape Francolin by the roadside and later the spectacular seed head of an Amarylis.  I pulled the car over to leap out and take more photos. Whilst doing this I noticed a strange plant at my feet. 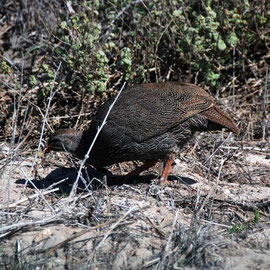 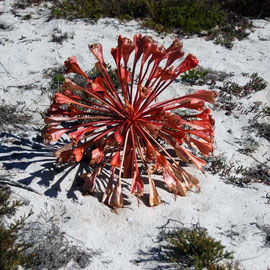 This wonderful plant, so exotic and other-worldly, with its overtones of fecund, sexual lassitude may be what is known as a 'Kukumakranka' but I have my doubts.

The Kukumakranka has club-shaped fruits that smell like strawberries, are very popular with people and animals, and are so fragrant that people used to use them to perfume their rooms and linen, and they were added  to brandy to make a pleasant tasting stomach-calming medicine called “koekemakrankabrandewyn” . Once common on the Cape Flats they are now very hard to find.

In fact the plant above is a member of the Euphorbia genus and called 'Gorgonis' after the Medusa and her two Gorgon sisters with their snakes for hair.  The plant is part of a group called Medusoid Euphorbias and was apparently named by Alwin Berger in 1910. According to 'Dave' at Dave's Garden (where there is a comprehensive list with photos) these Euphorbias are easy to grow and less toxic than most of the genus. They are sometimes grazed by cattle in South Africa. The 'arms' of Gorgonis are known for their tendency to turn purply-red.

Then I noticed amongst the fynbos huge mole-hills of freshly dug sand. These were surely no ordinary moles and I remembered somewhere reading about the Cape Mole.

A search on the internet brought up a really rather horrifying image of Cape Dune blesmol or 'mole-rat' (Bathyergus suillus).

The blesmol is the largest completely subterranean mammal in Africa. The body is cylindrical covered in short thick fur, with short limbs and a tail. There is a stiff fringe of hair on the tail and on the outside edge of the hindfeet, this helps to control the soil while digging. Adapted for digging, the eyes are small and there are no external ear pinnae. The nose is flat, with tough bare skin and valvular nostrils. One of the mole-rats most characteristic features are the large white protruding incisors. The lips close behind the grooved teeth, this stops the mole-rate from swallowing sand while digging or feeding. The feet have strong claws for digging.

They can weigh up to 2.5kg and if you want to see a photograph of this remarkable but not entirely likeable creature click here.

Slideshow of Lowland Fynbos in the West Coast National Park