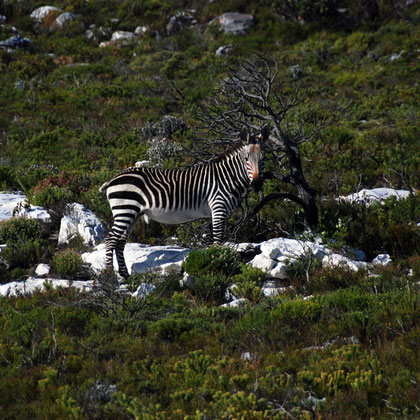 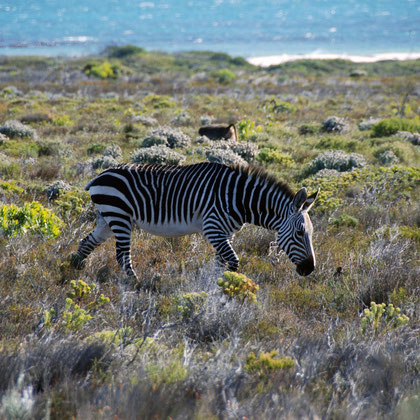 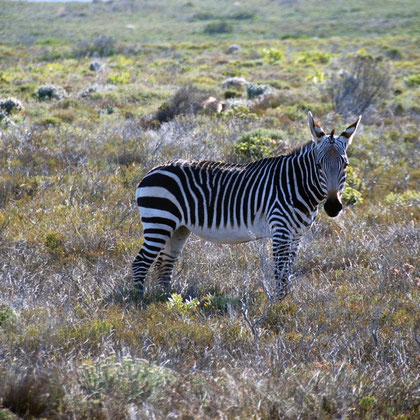 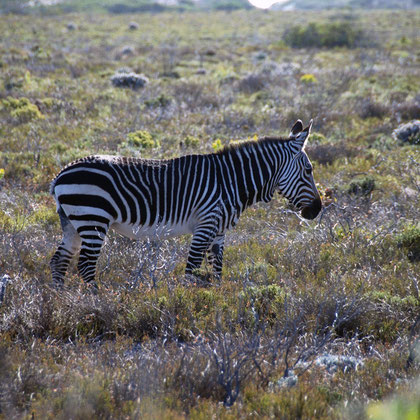 Driven to near extinction numbers of the Cape Mountain Zebra (Equus zebra zebra) were down to as little as 35 in a 1937 census. It is still on the Red List as endangered.  A few are found in the Table Mountain and Bontebok National Parks in the Western Cape.

We had searched across the shimmering renostoveld of Bontebok previously for a sighting and not seen anything. As we drove out of Olifantbos Bay near the Cape the cry rang out from the back seat, 'Guys, there is a Zebra. And I'm not even joking. There. There. A real Zebra.' And so it was. It stood there patiently letting me take some pictures from 50 metres.

When we revisited  the park six days later the Zebra was in same area, but on the other side of the road.  Apparently they are diurnal being most active in the early morning and late afternoons.

The Cape Mountain Zebra has larger ears, harder hooves and thinner white stripes than other Zebra sub-species. One foal was born in the Table Mountain National Park in 2011 - the first for ten years.  There were 400 Cape Zebra alive in 1984 (see Table Mountain Blog).

The one pictured here near Olifantobos Bay on the Cape had suffered an injury and lost its tail and its left flank was all stitched up, possibly from a car smashing into it?

In the 1950s the number of Cape Mountain Zebras reached critical levels. There were only 80 left and none on the Cape Peninsula. Since then conservation efforts have helped the population rise to 2,700.  But problems persist. Much of the population is fragmented into small, privately-owned herds where inbreeding is an issue.

The equine disease, Equine sarcoids, has badly affected some populations.  For example in the Bontebok National Park 53% of the population was infected. It appears inbreeding reduces resistance to the disease (see Hrabar and Kerley, 2009).

To: Bontebok and other antelopes