The road winds down the steep valley side below the Machairas monastery to the village of Lazanias. Tucked into the side of a long hill the 30-40 houses are huddled together by a pitch-roofed church. Workmen were renovating a house at the entrance to the village but a lot of it looked pretty run down. 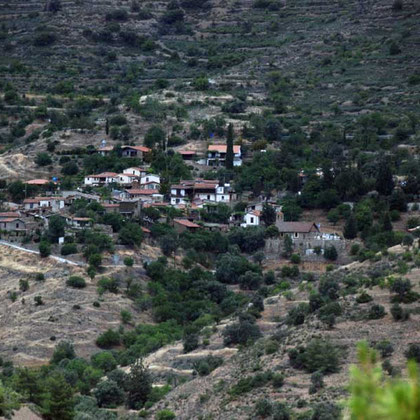 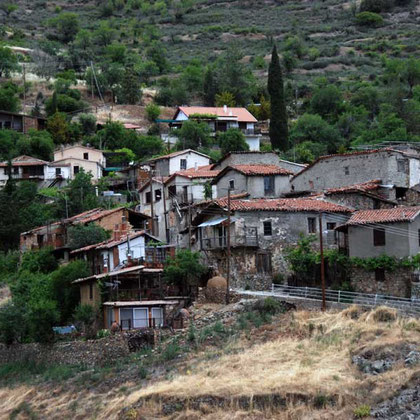 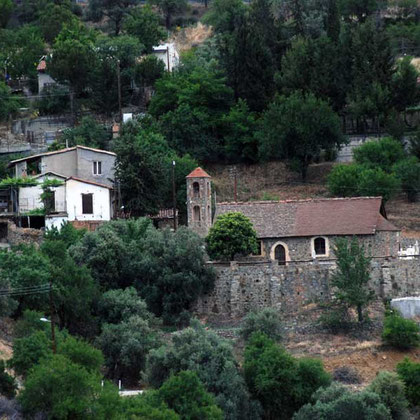 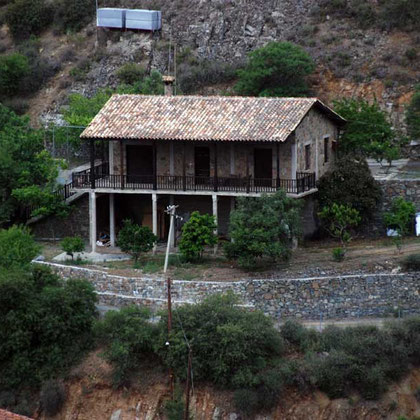 I continued on towards Fikardhou, following the signs for a taverna, as I was getting hot and hungry. Just after Lazanias a sign pointing up a steep single-track road pointed to ‘EOKA hideouts’. I started along this but turned round when it began to descend into the next valley. On my way back to the main road – so to speak – I took some pictures of golden flowered fennel and a lemon yellow flower I had not seen before. I eased the car down the concrete ramp to rejoin the tarmac and after passing through the edge of Gouri took a right turn up another steep hill to reach Fikardou. 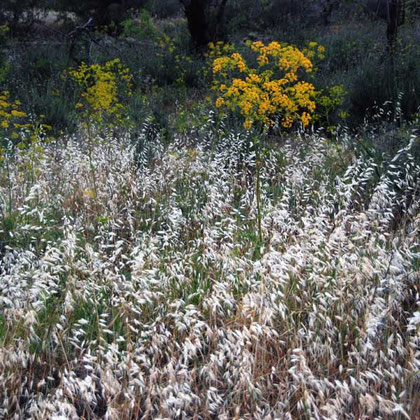 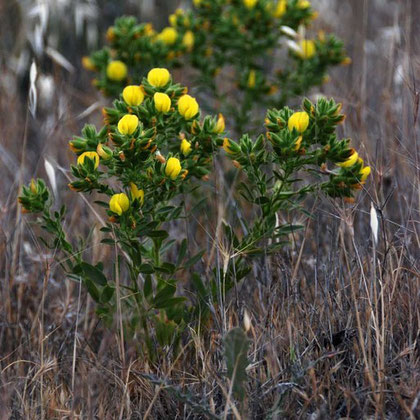 Marc Dubin is rather condemning of Fikardhou calling it an ‘embalmed’ museum-village (Rough Guide p.236) It was very quiet but for two groups of workers doing building or renovation work and a local party of visiting supervisors. But the village hardly seemed twee to me. It’s a shame the permanent population has dwindled to three but this may be as much to its remoteness as its status as a national monument. I suspect people don’t want to live in old cold stone houses when they can build modern concrete villas – just go to Gouri down the road to see them - and as our Greek Cypriot host, from a village above Limassol, had said later that evening, ‘Our young men do not want to work the land anymore.’

I was very pleased to have the village pretty much to myself, but for another Brit couple looking even paler than me, the workmen, the three folk museum staff, the couple at the local café and the guy mending the driveway of another house.

I parked up and wandered down the street into the small centre. I asked a guy for the Museum and he pointed at a small sign. I walked a tight alleyway between low houses and ran into the workmen doing the renovation. I was not sartorially quite with it, with pale legs, white socks and black shoes, and they seemed to find this amusing. I proceeded, feigning nonchalance, only have to turn back on my tracks to discover the snicket that led up to the entrance to the museum. 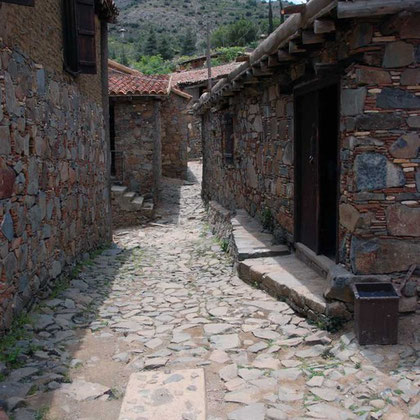 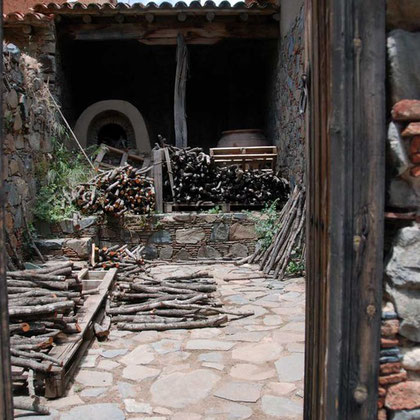 I handed over a 50 Euro note for the 1.70 entrance fee, which caused a search for the cashbox key but it was all very friendly.  One of the women staff unlocked doors and showed me around. The booklet that I bought says that the village was declared an Ancient Monument in 1978 when it was in ‘a sad state of dilapidation, seemingly forgotten by the outside world.’ By 1987 the Department of Antiquities had restored a quarter of the village’s houses. 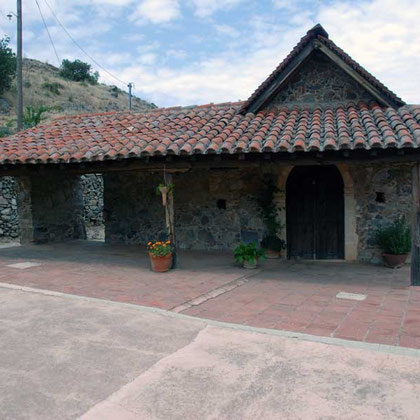 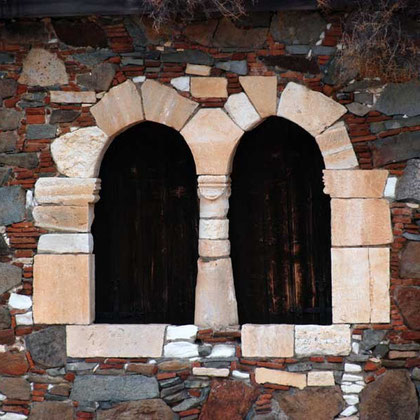 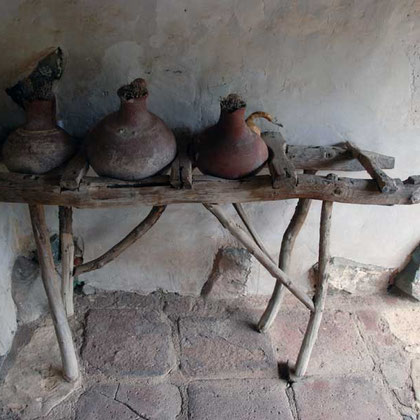 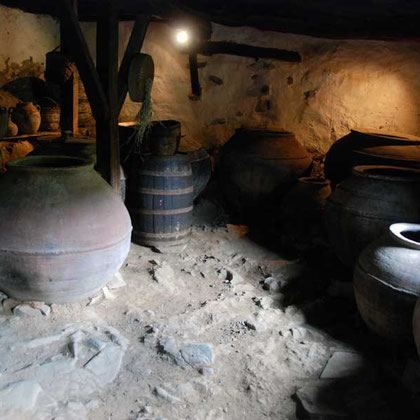 The official status of the village has prevented it being over-run with weekend and holiday villas, let alone new houses for the permanent residents.

The houses in the village date from the 19th century when the local economy was based on the production of wine from the steeply sloping and laboriously terraced hills. I walked along the abandoned and crumbling terraces which are impressive for the sheer amount of labour embodied in them. There are a few remains of vines, almond and fig trees, a tree with a large berry like a huge hawthorn. Apparently broad beans (Europe's only native bean) were also grown.

The wine was made in the cellar of the houses or at the village wine press. Zivania (eau de vie) was also distilled from the grapes. Rosewater was made using a similar process. Figs were made into fig-cakes (sykopites) and grape juice was used to make sweets (soutzoukko and kiofterka). The terraces were still being ploughed in the 1980s using mules and wooden ploughs.

The grapes were first spread out on the flat-topped roof above the cellar. They were then thrown into the cellar through a bottomless jar fixed in the roof. The grapes were first trampled by foot in the recessed area surrounding the press. Then they were  pressed. After the first pressing they were beaten with a big flat piece of wood and re-pressed to get out every drop of juice. The juice ran through a gap in the parapet – see middle of left hand parapet wall above - into an earthenware jar half-buried in the earth floor. 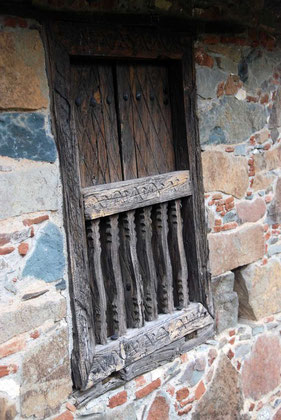 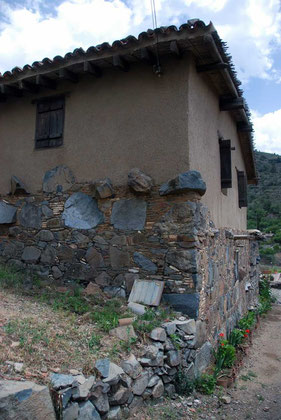 I really enjoyed my visit and had a lovely walk out on the terraces behind the Rural Museum that took me to the brow of the enclosing hills. On the way I saw the rear end of an endemic Cyprus hedgehog (Hemiechinus auritus dorotheae) disappear into a gap in one of the terrace walls.  Apparently they tend to be found at higher altitudes but it couldn't have been anything else. 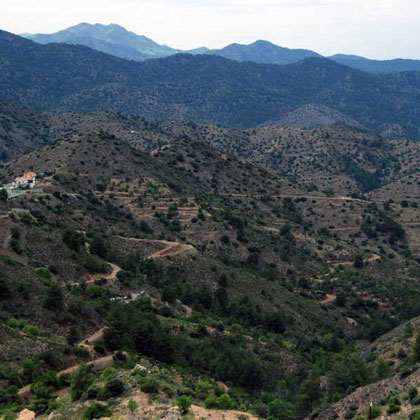 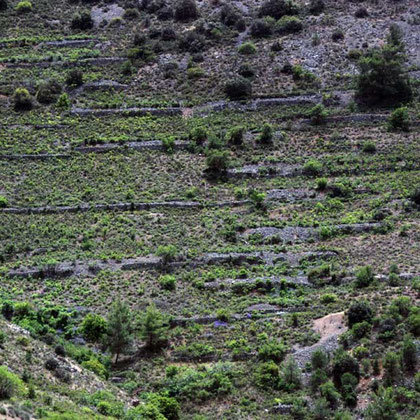 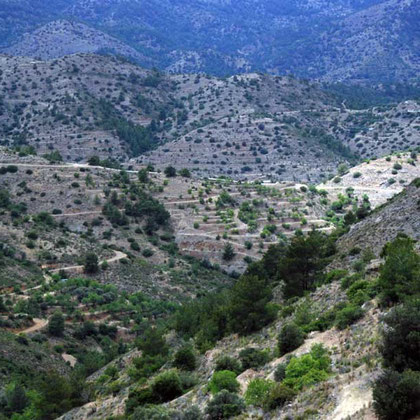 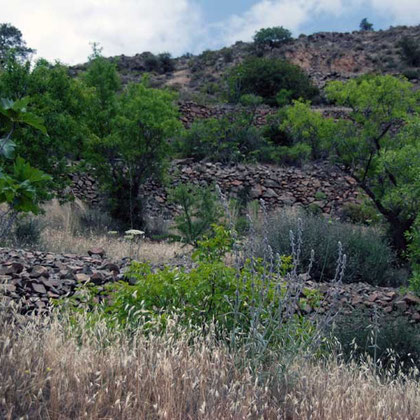 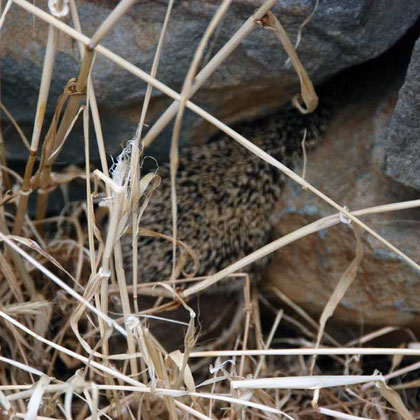 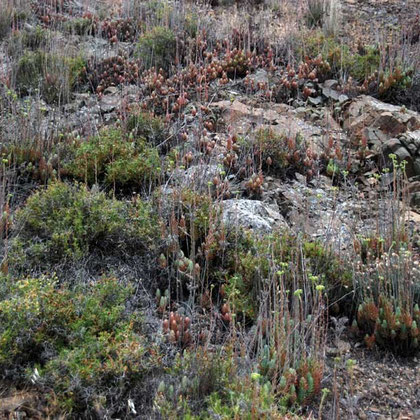 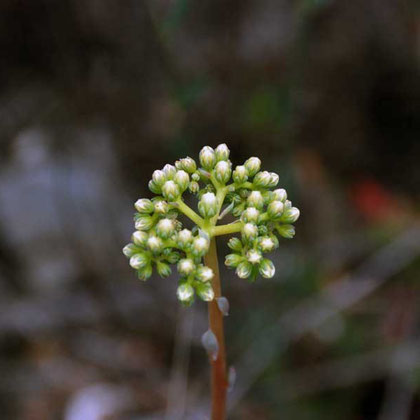 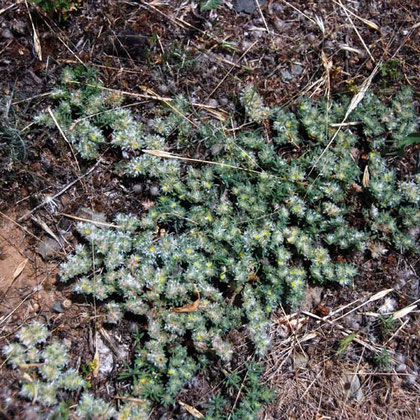 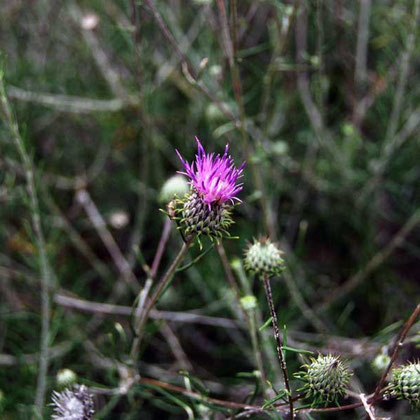 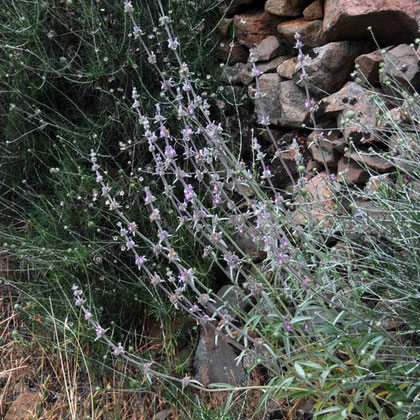 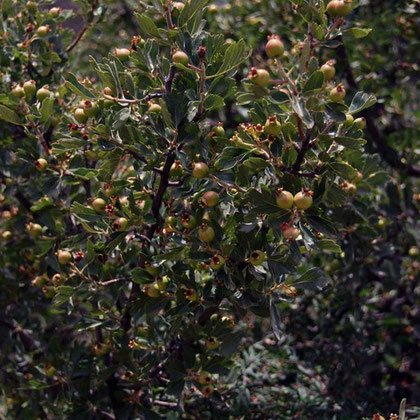 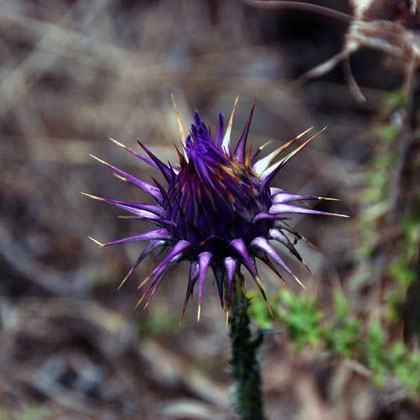 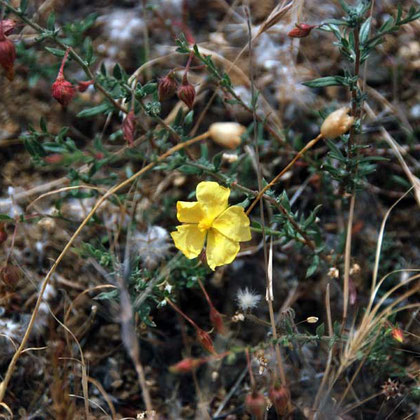 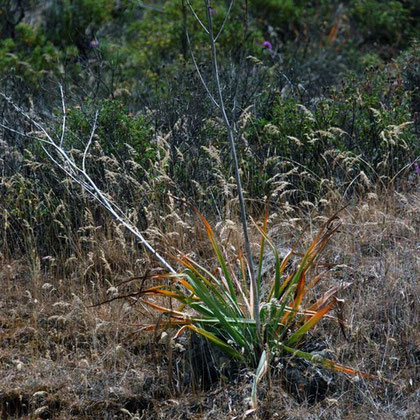 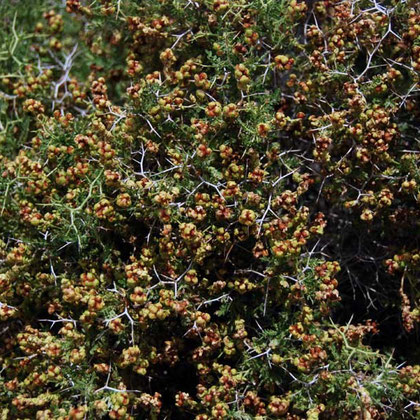 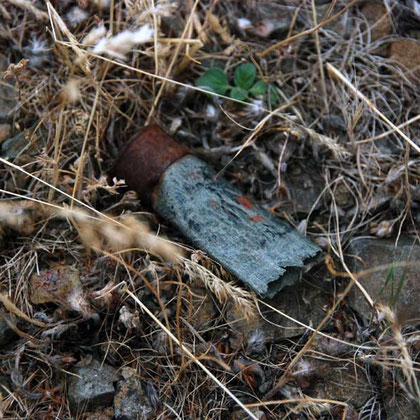 Before leaving the village I walked up the steps to the memorial for four very young looking EOKA fighters. The Republic of Cyprus and Greek flags flew together over them.

By now dizzy with hunger and stunned by the bright sunlight I rolled down the hill to nearby Gourri. I had a Village Salad at the little taverna and a large bottle of very cold Keo lager.

I watched the house martins feed their young above me at their nest under the terrace roof and eventually moved on having decided not to sample Gourri’s nature walk. Four elderly Brits left the taverna before me only to arrive back ten minutes the later. One of the women said she couldn’t stand the vertigo the mountain roads brought on. The two blokes hesistantly decided to leave the ‘ladies’ and make the ascent themselves.

I drove back through Fhikardhou, stopping to take a photo of a hilltop house for sale for 175,000 Euros on the long descent to the plains below. I cut across the foot of the mountains in search of the ancient kingdom of Tamassos and had a really frustrating time following inconsistent signs.