The Cape Chacma baboons (Papio ursinus ursinus) are under considerable threat on the Cape. This is due to the erosion of their natural habitats and increasing interaction with humans.  The latter leads to conflict and the killing of dangerous males and obesity and poor diet from feeding on human trash.

There are currently 11 troops of Baboons on the Cape Peninsula, which vary in size from 100 to 7 individuals.  Four of the troops has a group of Baboon Monitors, who monitor the troops on a daily basis and attempt to minimise the negative impacts of baboon/human interaction. This ranges from baboons getting into cars and stealing bags in the search for food to them getting into restaurants, apartments and bins and generally making a racket.

Baboons are among the most behaviourally flexible, adaptable, and intelligent mammals and thus become very easily commensal with humans. If they are fed by humans or otherwise learn that they can obtain food from them, baboons will decrease their efforts to find natural foods and will become increasingly daring in their attempts to get an "easy meal." The end result is that baboons will turn aggressive, will be identified as "problem animals," and will be killed.

As of 1999, the Baboon Management Team (BMT) and South Africa National Parks have employed "baboon monitors" to prevent baboons from entering residential areas as well as to move baboons out of human-frequented areas before conflict occurs. 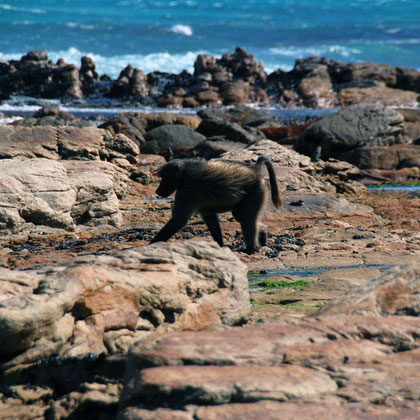 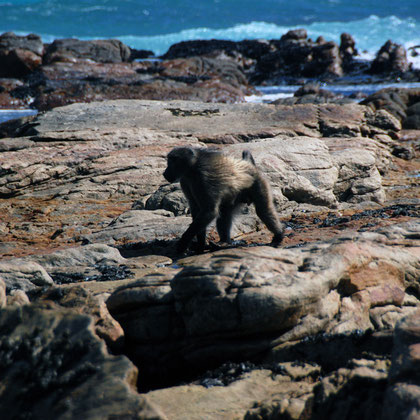 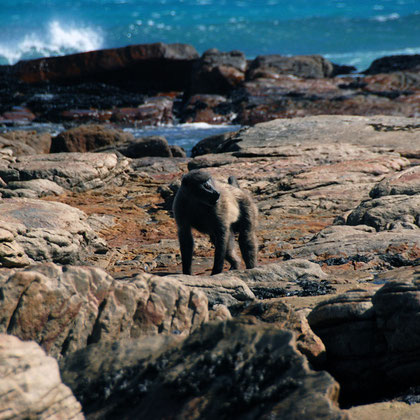 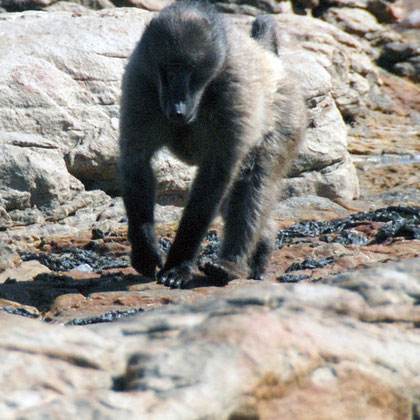 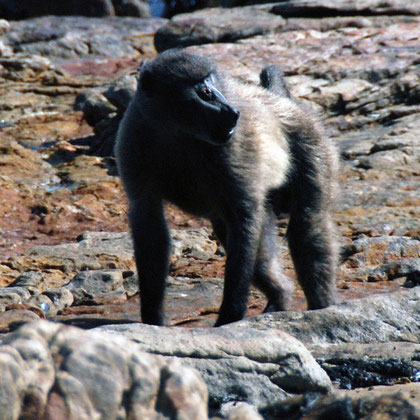 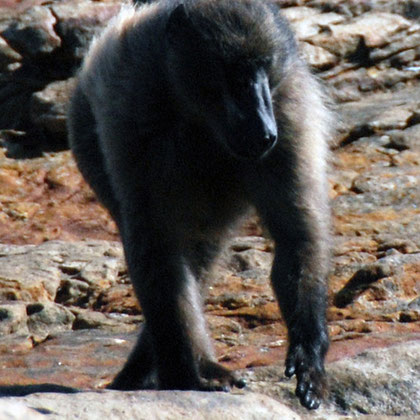 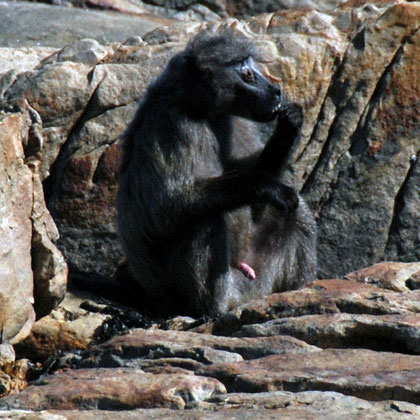 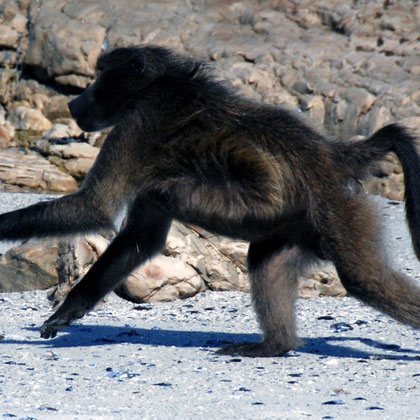 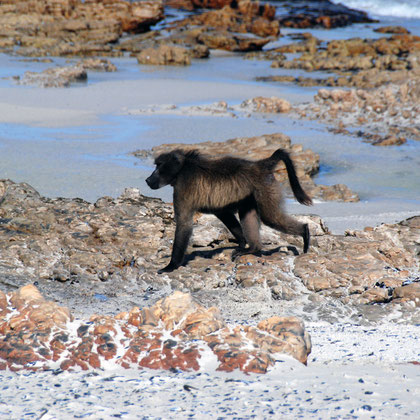 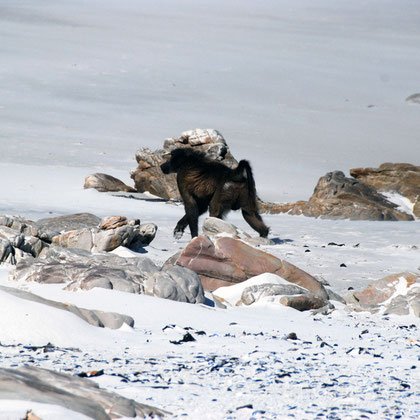 There is an excellent short TV series made on the Cape Chacma baboon troops starring the baboons and Bill Bailey.  It's available as a DVD.

We came across the lone male baboon (above) on Scarborough Beach on the Cape Peninsula on a brilliantly clear sunny day with the south easterly 'Cape Doctor' blowing a hooley.

The baboon appeared, somewhat to our surprise, from the rockpools we had been heading towards.  He was foraging for food from the richly endowed rockpools. At one point he sat down to eat something on his haunches, his generative member glinting in the sun.

He was clearly wary and kept a sharp look out before running up the beach into the fynbos behind it.  He had a wound on the bridge of his nose. We had read in the local paper that people in Scarborough had controversially been given permission to use paint ball guns against the local Scarborough troop as a way of 'discouraging' the baboons from raiding bins and gardens in the area and mucking about on the top of houses.

One of the gunners, specially trained by the Sport Paintballers’ Association said,

“We succeeded in the sense of getting the main troop (of about 14 animals) entirely out of the village. But for the first two-and-a-half hours the baboons made absolute idiots of us – we were running around like headless chickens,” he confessed. “But then we got better organised and discovered the method to use, so we’re very pleased.”

He conceded that by 8pm some of the animals had moved back into the village and were on a resident’s roof – “But we knew that would happen.”

The Cape Chacma are one of the largest sub species of baboon and are distinguished by their long downward sloping faces. A fully grown male can weight up to 44kg (97lbs) and have canine teeth as long as two inches. Chacma males doe not have a mane, like other baboons.

The photos below show members of the Olifantbos troop foraging through the fynbos.  They were moving surprisingly quickly and were intent on their work and completely ignored us in our car.  The wind, if anything, was blowing even more strongly than in the morning when we had come across the male of the Scarborough troop.

On our first visit to Olifantbos I had come across the skull of a baboon (young or female?) and the jawbone of a male on the rocks just above the tide. (See bottom of page.)

When we got back to the safety of our house in Cape Town I wondered where the troop was sleeping in the howling gale that banged and rattled at the windows.

In 2007 it was thought the Cape population of Chacma baboons would be extinct within 10 years. 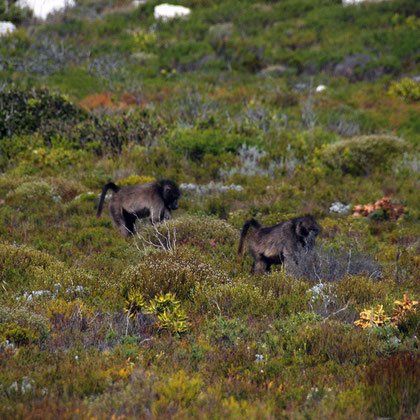 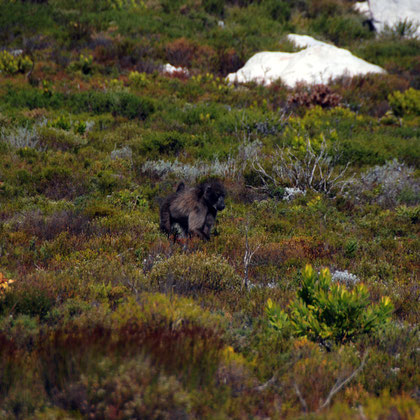 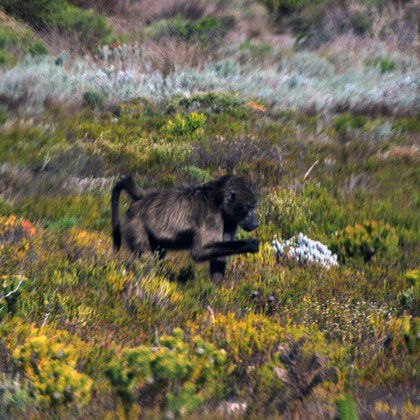 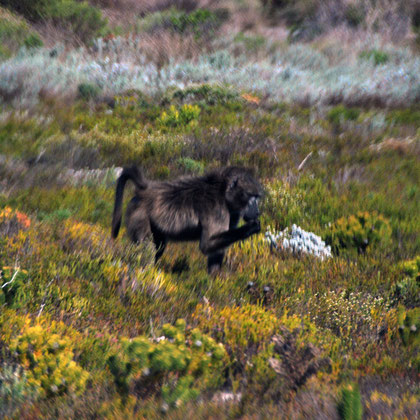 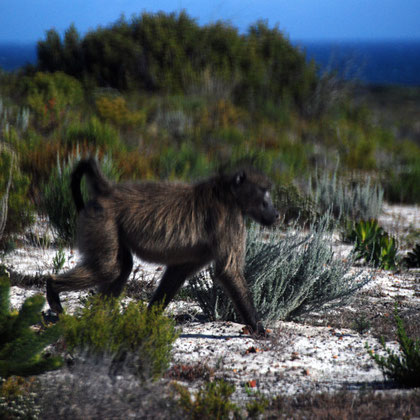 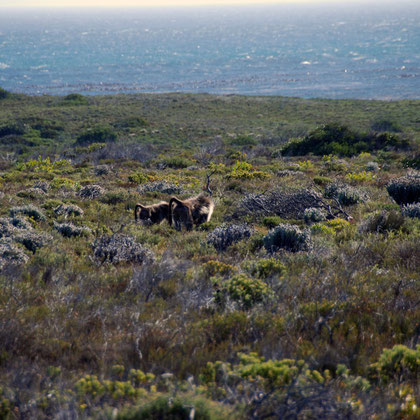 We came across these mums and their young ones below on the main road through the Table Mountain park to Cape Point.  Baboons are incredibly adaptable and if tourists give them food they will take it.  And if they get out and leave their cars unlocked they'll get into the cars and be off with their cameras, handbags and picnics.

We were lucky to be in Cape Town at the end of the season when most of the baboons have moved on from the tourist lay-bys that they increasingly frequent.

We got slightly contradictory advice on dealing with baboons.  Some people said a clap of the hands would be enough to keep them at bay.  Others warned that carrying any bag in the National Park, particularly if it contained food, was likely to attract the unwelcome attention of the dominant males. 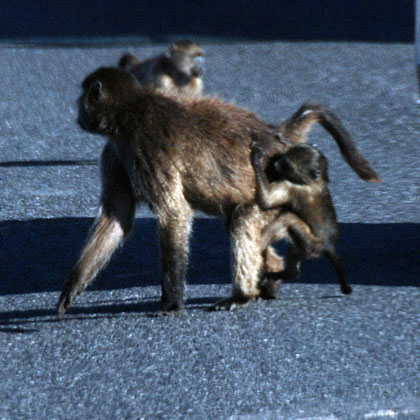 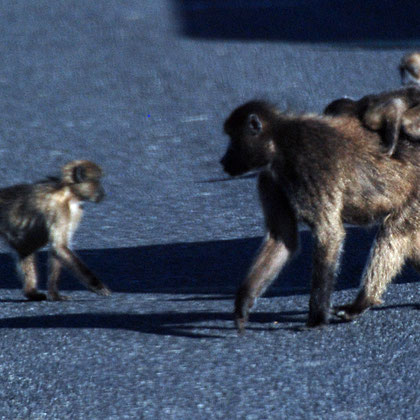 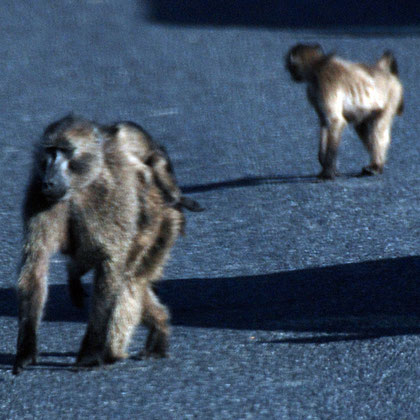 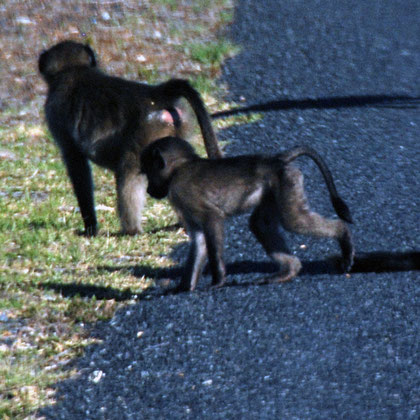 It is salutary that somewhat belatedly the Cape's baboon population is being given due consideration. Whether or not the increasing pressures on the fragmented troops by rapid urbanisation can be resisted is a moot point.  But the conservation efforts are better than extermination and a harsh reminder of the fate of the original human inhabitants of the Cape Peninsula at the hands of the white colonist (see Slaughter, Slavery and Segregation).

If you want more photos of Cape Baboons take a look at Brett Cole's photolibrary here.  He has also put together an online book on the wildlife on the Cape with some great photos here.