We arrived late in the afternoon at the Boulders African Penguin Colony on the edge of Simon's Town. It had been a long day after a heavy night of Tamboerskloof hospitality. The sun in the Cape's crystal air was low in the sky and nagged at my eyes as we walked the plankway to the entrance.

Then I caught out of the corner of my eye a platoon of penguins careening through the water making for their base on the bay.

I was thrilled to see them speeding through the water like tuxedo-ed bullets only to pop out onto the huge boulders and do the short-leg strut to the sheltered beach. 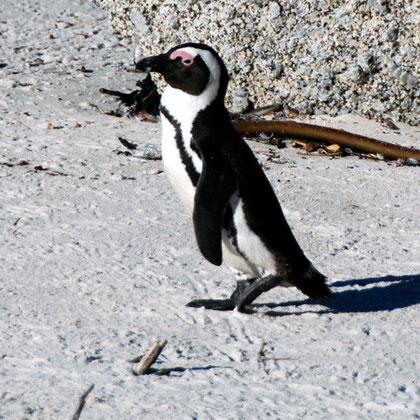 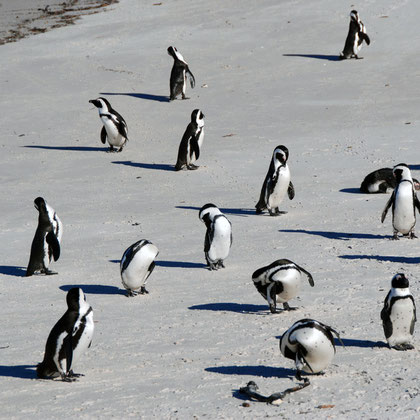 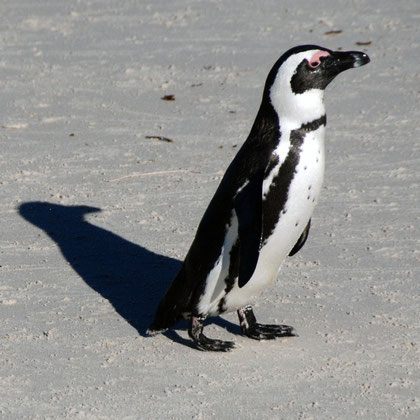 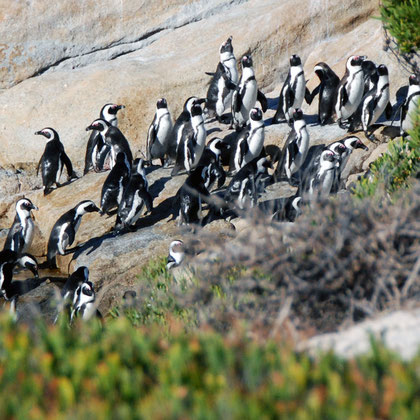 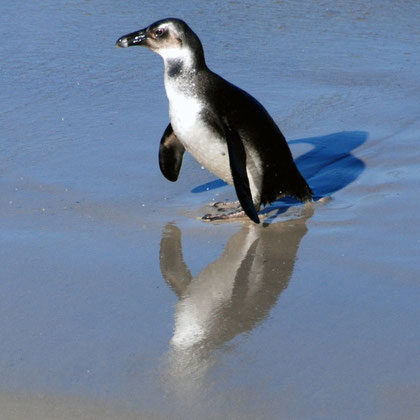 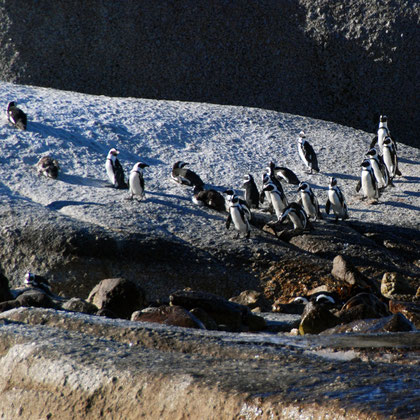 But penguin numbers have shown an alarming decline:

In Saldanha Bay, which includes Langebaan Lagoon and Vonderling Island (see West Coast National Park (a) ) the situation is worse with a 75% decrease in 24 years from 2,049 breeding pairs in 1987 to 506 breeding pairs in 2010 (see Anchor Environmental).

The reasons for these declines are unclear but thought to be due to the destruction of Penguin foodstocks through purse-seine fishing.  Exclusion zones have helped Penguin numbers to respond in one case in the Eastern Cape but not at Robben Island.

A consequence of declining nesting colonies is their increased vulnerability to predation from Kelp Gulls and seals.

These are African Penguins (previously known as 'Jackass Penguins' due to their braying call).  They are one of 17 species of penguin and can weigh up to 3.7kg. The African birds are specially adapted to be able to cope with onshore heat and live on average 10-11 years.

Penguin survival and breeding success is closely tied to the availability of pelagic sardines (Sardinops sagax) and anchovies (Engraulis encrasicolus) within 20–30 km of their breeding sites.

African penguins inhabit twenty-seven inshore islands, of which the best known is Robben Island. There are only three sites on the mainland.

The largest existing colony is on St Croix island near Port Elizabeth which has 50,000 birds. Dassen Island off Yzerfontein was once home to over a million penguins but now has about 30,000.

The Boulders Beach colony at  Simon's Town has over 2,500 birds. Surprisingly the Boulders community is very young, having only been established in 1983. Such an influx of penguins has caused problems to local residents as have the subsequent tourists (see Simonstown.com).

The human race has been a heavy exploiter of the humble penguin. The birds have been used for their eggs and meat.  Indeed, in the early 17th century employees of the Dutch East India Company garrison were reduced to eating penguin and cabbage (Welsh 2000 History of South Africa, p.30)

Early explorers, sealers and whalers took more than 300,000 eggs in annual harvests from one African island. And  up to 3,000 penguins  a day were killed and salted  for voyage provisions.

Penguin oil was used for lighting, tanning leather, and fuel. In the Falkland Islands alone, an estimated 2.5 million penguins were killed within a 16-year timespan. The Humboldt penguin was a great producer of nitrogen-rich guano.

Penguins were also used to fuel the fires made to reduce whale oil.  They were simply thrown into the fire whole and sometimes alive (see seaworld.com and penguins.cl). 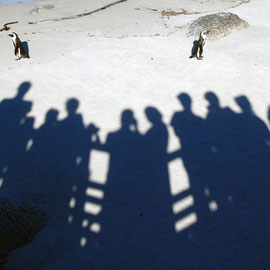 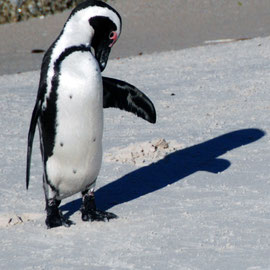 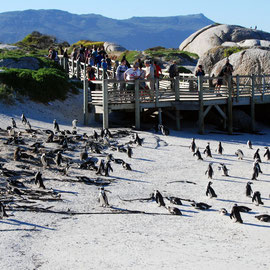 We headed back through Hout Bay and a long winding road to Constantia and a baffling M3 turnoff. Back at Tamberskloof HQ our exhausted and hungover host suggested take-out pizzas.

We watched Invictus with me sobbing into my mozzarella over the death bed conversion of the Springboks rugby team to rainbow-nationalism. We went to bed early behind barred windows and the 24 hour-armed-response alarm.