We'd arrived on the coldest day of the winter in January 2013 and the next day was no better. A bitter wind was blowing hard from the north-east but the sky was clear and the sun was shining (see my page for the journey along the Green Line to the east coast).

End of the line: polytunnels, villas, more villas and the tiny cove of Agias Trias 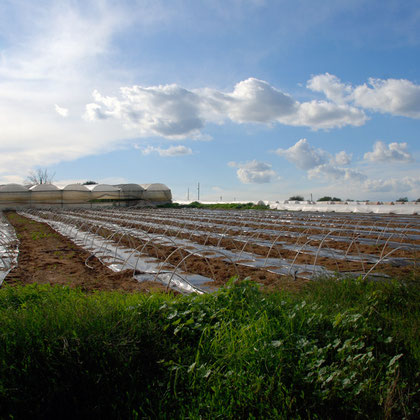 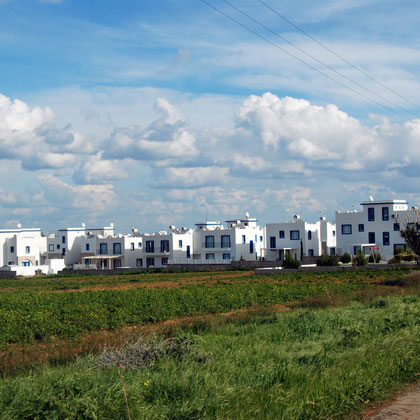 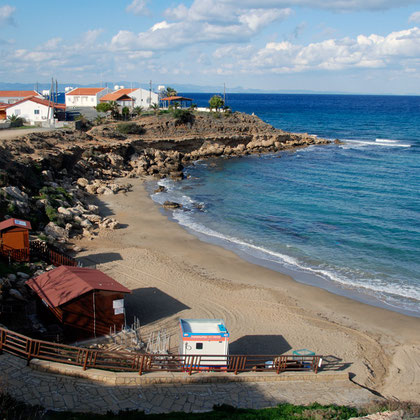 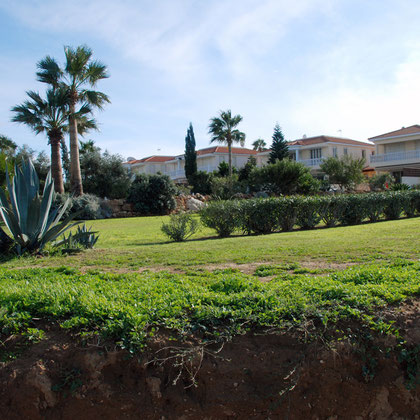 I stopped in the car park above Agias Trias (15km east of Cape Greko) which I found after driving around dead-end villa streets that terminated in water-cut gullies of wash and rubbish where the tarmac, and development, ran out.

I chewed away on some lefttover Christmas paneforte I'd brought from England as the wind rocked the car. Everything seemed shut up tighter than Chancellor Osborne's wallet.  Far away to the north-east I could see the Karpas Peninsula stretching away under driven clouds that massed into a huge storm over where I imagined Syria lay less than 100km away. (I later learned the country and the refugee camps on its borders in Jordan and Turkey had experienced its worst winter storms for 20 years.)

I pulled on all the clothes I had: jacket and cagoule, gloves, hat, scarf, and stumbled, leg-cramped and ass-sore, out the car and into the wind. I walked along the path that wandered along the top of the stubbly, bubbly foot-cutting cliffs and little bays. The light was brilliant, the colours staggering, if you ignored the villas edging down to scrubby littoral of vegetation spared between the hammer of development and the anvil of sea (thanks to John Berger).

There was not a soul on the beach - you would have been mad to - as the waves slapped in and the gale buffetted the turquoise waters.  I could only imagine the crush that the summer would bring as the villa-packed streets - that went bank rank-on-rank - emptied out after the hottest part of the day. Signs advertised boat trips to Famagusta for shopping and the beach to escape the crush.

I got myself out on the furthest promontory where I could see the towers of abandoned Varosha flitting in and out of the sunlight. I steadied myself in the gale, twisted the lens out to maximum magnifcation and took some photos, my eyes streaming tears in the blast.

I continued my walk, past a little kestrel sheltering on a shelf of rock. It was s tough going on the knobbly, edgy tan rock and despite my exertions it was still bloody cold, glacial in fact.

Having got the cramps out of my legs I whipped back to the warmth of the car and disencumbered myself of the winter clothes I had fortuitously packed two days before thinking, 'Nah, Cyprus will be balmy, mate.  Positively balmy.' But it was anything but.

I drove out of the maze of villas and got on the main drag into the 'developmental disaster' (Rough Guide, 2009 p.113) that is Protaras. It didn't look a disaster to me, but it was early January and I had the road to myself. It did look like a right mish-mash of hotels and styles and I just wondered where all those nice families and there kids would go when the temperature was climbing into the 90s by 10 am in the morning.

Every now and then I'd spot an older building, surrounded by the encroaching development. I feared that it - the development - would go on all the way round to Cape Greko and on into Agia Napa.  But I was mistaken.

I drove up the steep hill out of Protaras and its vacant, windswept lots awaiting development, past the monstrous Grecian Park Hotel, on the bluff above Konnos Bay.  I couldn't help myself from pulling off and driving down the narrow,  winding, pine-festooned single-track road into the Bay for a quick look-see.

It was lovely in its own off-season way. But God only knows what time you would need to arrive in the summer to secure a parking place.  And I could only imagine the nightmare of trying to leave the place with a car-full of wailing, sun-burnt, frazzled children against the angry flow of cars forcing their way down the narrow track.

It is also one of the few places where I've seen fire hoses at the ready - for a forest fire up the steep, windswept slope of resinous pines - where there are signs instructing the hapless tourist to figuratively man-up and fight the fire with the hoses.  The last place you'd want to be as a fire took hold is halfway up that slope in your swimming trunks with a hose.

I drove back to the top of the bay and on to Cape Greko. The hotels and villas stopped and I was driving through open, scrubby country high above the sea. I turned off and drove down the deserted road to the wired-off headland that is the Cape (which houses a lighthouse, a British military installation and a relay station for Radio Monte Carlo International). I took in the scenery, stumbled about on the brilliant, bare ochre rocks, noted the even bigger storm clouds over Syria and moved along to the rock bridge and the many birds tweeting through the bushes and then on to a little chapel surrounded by cats.

I looked at plants as the builders working on the chapel looked at me.  And I nearly went for a spectacular Burton as my feet slid from under me in a patch of glutinous red mud.  Luckily disaster was averted and honour saved. 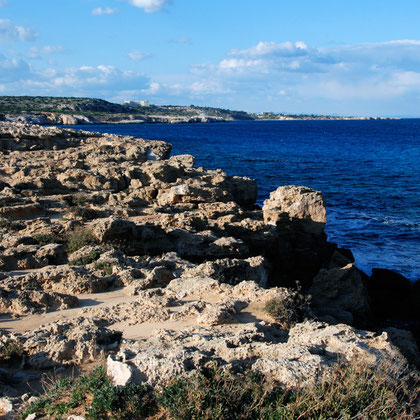 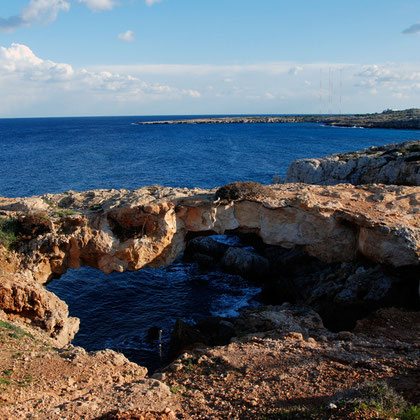 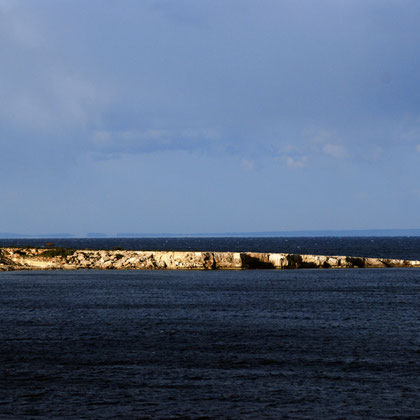 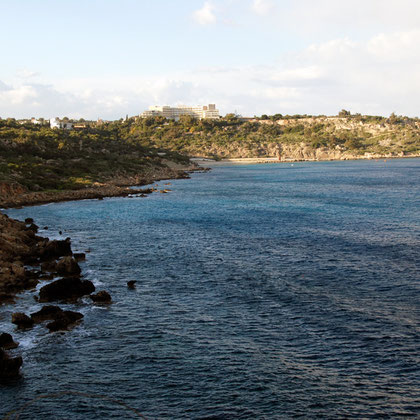 I will say that it was more than I expected. I had thought there would be but a momentary break of low scrub-covered cliffs between Agia Napa and Protaras. There is enough windswept maquis and rocky coastline to get a sense of what this part of Cyprus was like before the surge in residential tourism and drunken high jinks in Agia Napa.

There were interesting looking plants and a harrier (Montagu's?) that skudded across the sky before quartering the fields on the hill above the Cape. A lone, twisted, windblown pine stood in splendid isolation, shading a bench and catching the light of the descending sun and a gravel road pointed hopefully to the ‘Sea Caves’. 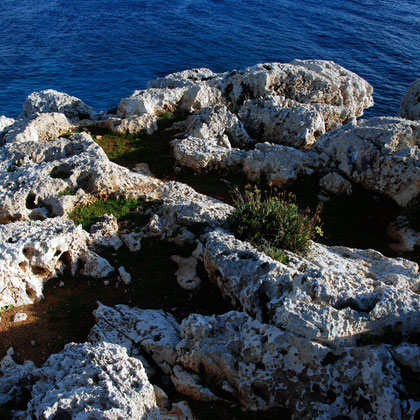 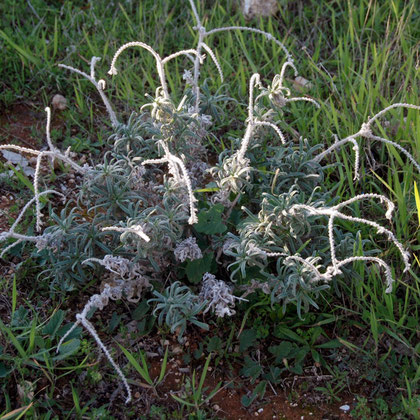 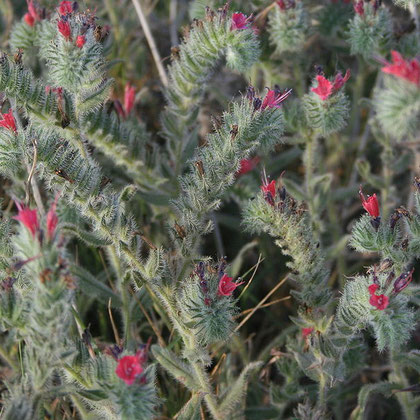 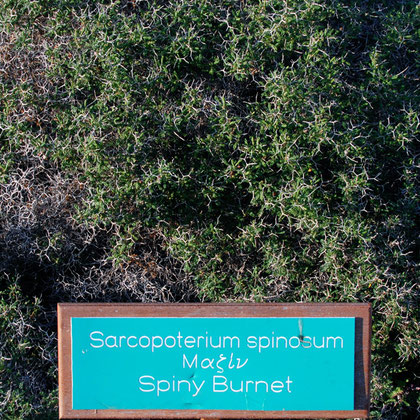 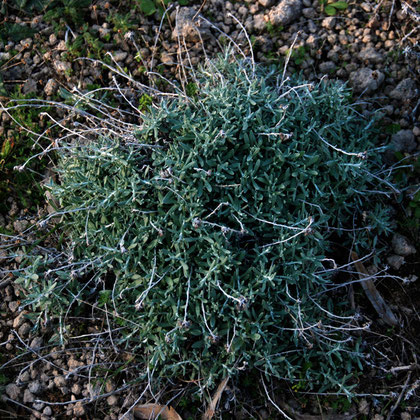 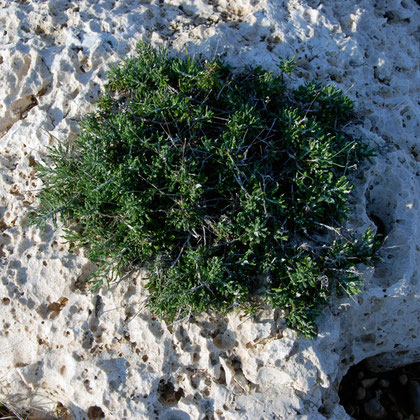 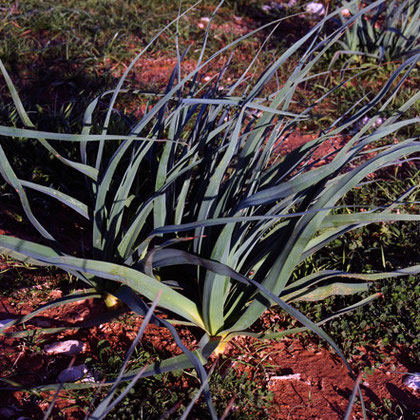 But my enthusiasm was short-lived as the track skirted a very active, smouldering rubbish dump that seemed to have been situated were it was in order to disabuse anyone that anything in Cyprus could be sacrosanct or worth preserving once the cash and corruption started rolling in.

Following the sun and the incredible vista that opened up over the Larnaca Bay to the great mass of the western Troodos I rolled down the hill to rejoin villa-land and Agia Napa.

I drove through some of Agia Napa which was, of course, deathly quiet it being January. But it surprised me that it was not bigger. I got back on the motorway to Larnaca with the sun in my eyes. Bored and with the sun in my eyes, I took the exit for Liopetri, turned towards the sea and arrived at a very workaday and very lovely in an under-stated way, fishing creek.  The sun was getting lower and lower in the sky creating wonderful, rich, golden light.

I took some photos of the fishing boats and the small waves crashing in on the diminuitive beach.  I drove along the track behind it avoiding huge puddles and potholes until I arrived at a taverna shut up for winter.  I retraced my steps and got back on the motorway and set the controls for Nicosia.  I arrived just as thick night was falling. It had been a grand, if cold, day out.

We repaired to the bar for a beer and catch-up and went out to a fish meze restaurant, which was thankfully well-heated, in a Nicosia suburb.