I had already had a fantastic day out and yet, for me, the best was still to come. I eschewed the almost obligatory trip to Kykkos Monastery, home to the late and legendary, Archbishop Makarios III.  This was partly due to time pressures; partly because I preferred the cathedral of the open air and partly because I had made a promise to the waitress at the hotel to see her village of Kampos.

So I followed the winding, wiggly road back to the main road and took the turning for the steeply descending route to Tsakistra and Kampos and at one time, before partition, Morfou Bay.

It is amazing how quickly the landscape changes over the short course of a few kilometres.  The houses of Tsakistra were the first I had seen for four hours since leaving Pomos.

In Kampos I saw cherry orchards and cherry trees laden with cherries. Stupidly I had bought cherries in the supermarket in Polis and had been munching them on my way through the Tillirian wastelands. I hope they had originally come from Kampos. They were small and tasty.

Kampos had a taverna and big Plane trees with their feet in the river bed. In my fantasy I had imagined stopping at the taverna and explaining that I knew Ileda who worked in the hotel and had come to visit her village.  But I drove on aware the day was only so long and that fatigue would set in at some point.

Kampos is isolated, a long way from anywhere.

If you have time and not a care in the world the road from Kampos that winds its way over the more benign hills of the Troodos - at least for the first part - is a delight. I again saw no car for miles  and miles of spectacular road with stunning views down to the forbidden sea (because of the Green Line) at Morfou Bay. 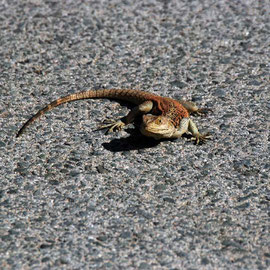 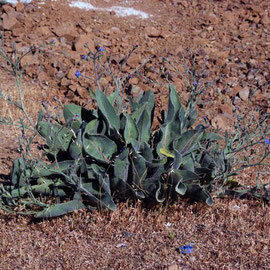 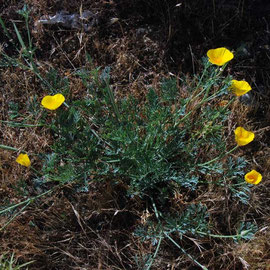 The road from Kampos down towards the sea is a road of such glory and heartbreak, of such beauty in its elemental simplicity, its sparse palette of vibrant deep-sea blues and ultramarines, the ground-down ochres, delicate sandy pinks and glowering ox-blood reds all set against the stately calm, flat greens of the Brutia pines, the sparse almond trees and vines.

The sea beckons, welcomes, calls, siren-like after the harshness of the mountains.  The valleys open out, are more generous, grip less and hold more. And yet.  And yet. Beyond the last row of hills stands the ugly scar across the island, the Green Line, the buffer zone, the no-mans land. For so long (38 years now) the end of transit and commerce of communities that lived together with their hopes and fears, their tensions and their understandings.

So the road must turn right angle east and traverse each laborious deep-set angry, empty valley, crossing the great washes of the winter torrents that gush out of the Troodos impatient to bury themselves in the sea, careless and immune from man's divisions and barbed wire, his flags and languages, his watch-towers and his UNFICYP peacekeeping troops.