A. The State Gallery of Contemporary Art, Nicosia

The Contemporary Art collection is housed – say the guidebooks - in a spectacular building. I didn't know what to expect as I walked along the outside of the old town walls – maybe some modernist confection amongst the stunted tower blocks of Nicosia’s myriad banks and insurance companies.

What you get is a grand three storey neo-classical limestone building with half balustrade and cupola and very tightly shut green shutters in its many and large windows. I assumed it must be shut. But I eventually found a door and broke into a fairly sepulchral silence.

A woman popped out of a closed room and gave me a cursory greeting and that was that – I had the entire place to myself but for the pervasive smell of cooked rice and vegetables that came from the room into which the woman had disappeared.

Not surprisingly, the collection is modest and very much about Cyprus. There is a lively and fresh painting of Nicosian rooftops, minaret, lush trees and blue Kyrenian mountains in glowing colours painted in 1959 that spoke of happier times when the city looked more like a lush village than a war torn and scarred place of abandonment and silence. Although, by '59 the EOKA campaign of bombings and killings against the British was coming to a climax.

There is a simple elongated Virgin of Liopetri (1952) by Giorghios Giorghiou where a peasant woman in an ultramarine dress holds her growing baby son. There is a moving woodcut of field workers returning home that gives a hint of the hard conditions faced by Cypriots for many years – the baking summers, the plagues of locusts, high imperial taxes from a whole string of different rulers.

A rather sullen and heavy-hipped half life size nude woman in marble by Nicos Dimiotis (1930-1990). And a couple of more appealing 'folk art' paintings of a village coffee shop and a woman on a mule by Michael Kasholos (1885-1974).

In his grand manner, Durrell announces that there is only one Cypriot painter of his generation of European significance, George Polyviou Georgiou (1901-1972) (see Bitter Lemons of Cyprus, p.110).   Either I missed his work or he is not in the State Collection.  The A G Leventis Foundation published a catalogue to accompany an exhibition of his work in Nicosia and London in 1999.

The Folk Art museum is housed in the surviving part of a 14th century Benedictine monastery with an overhanging upper floor held up by timbers reminiscent of a ship's hull and forms part of the Archbishop Makarios quarter – palace, cultural centre, icon collection. 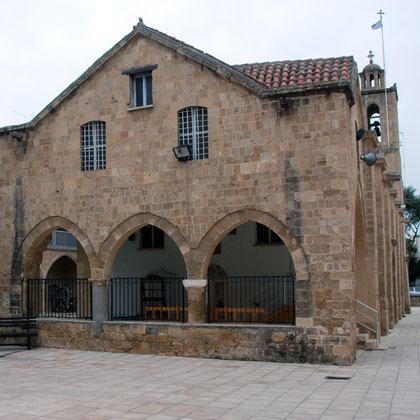 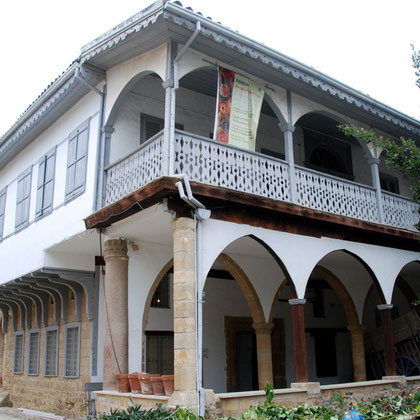 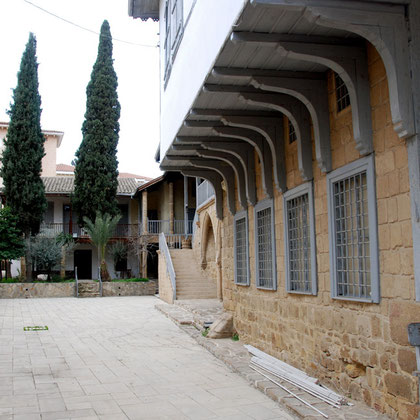 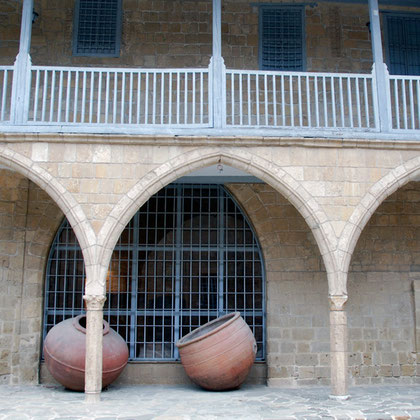 Again, I was the only visitor in the museum, which was deathly quiet, until the curator was joined by an older colleague. Their subdued conversation echoed through the rooms of the small museum.  There was much to see. I was taken by the wax-made votive effigies – tamata - of body parts, dogs, etc left at holy shrines in the hope of a cure.

Photography was not allowed.

I was tiring by now but struggled into the Archbishop Makarious Cultural Centre to see the mosaics and frescos repatriated from the ‘Turkish-occupied zone’ after they had been stolen by looters and smuggled to Germany. The mosaics I saw were fragments of a large scene.

The frescos were more interesting but photography was strictly prohibited and rigorously enforced by a group of uniformed women guardians. The icons were overwhelming in their number and it was hard to separate the good and excellent from the indifferent. It felt like a very big propaganda show - particularly the section on Archbishop Makarios himself

I staggered out into the growing dark past the two preserved cars of the Archbishop ( a Mercedes-Benz 600 and a Cadillac Fleetwood 75) – both with ‘A K’ licence plates - and back through the Old Town and up the hill to the hotel. On the way I stopped and picked up a bottle of Cyprus wine from a wine shop and returned wearily to the hotel for a Cyprus Mixed Grill and Village Salad. It was delicious.