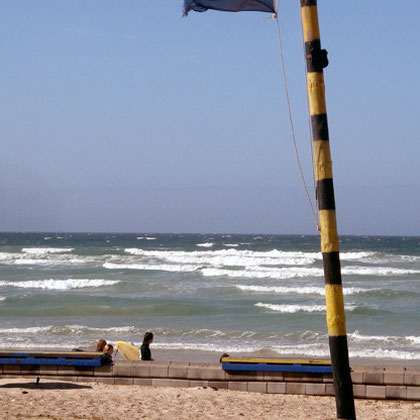 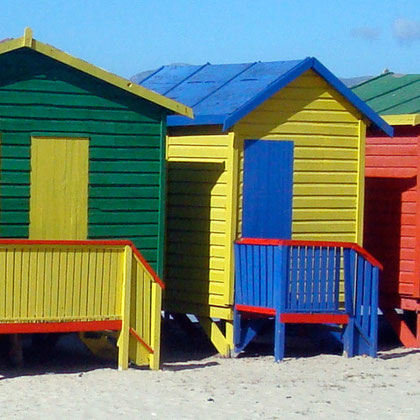 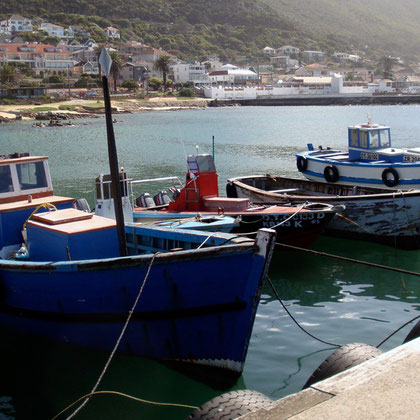 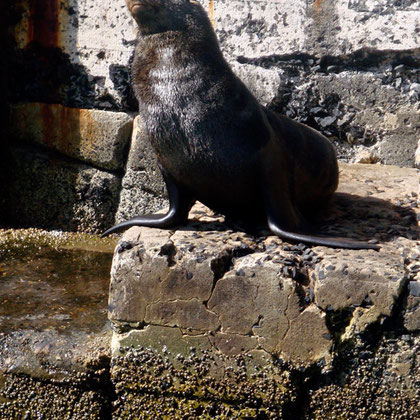 Kalk Bay is a tiny harbour at the back of False Bay for day boats.  It is very exposed to the massive swells that come down the bay that can be generated thousands of kilometres away in the depp southern oceans near Antarctica. The swells enter False Bay and refract around and gain huge force at Kalk Bay.

For example in August 2005 a very intense vortex located south-east of South Georgia in the Southern Ocean, 3000 nautical miles from Cape Town, with the pressure recorded as dropping below 940 hPa (Hurrican Sandy has a nadir point of 950hPa) combined with a weather system nearer Cape Town to create 10m (33 ft) swell with a wave period of 18 seconds) that after 4-5 days travelling time cruised into False Bay (see Cape of Storms).

It can of course be argued, with some justification, that the real meeting point of the warmer Indian Ocean and the colder Atlantic is at Cape Aghulas, 200km further east of the Cape of Good Hope. Nevertheless, the sea is considerably warmer on the eastern side of the Cape in False Bay than on the beaches of Clifton on the western side. Just ask bathers, surfers and bodyboarders , who are regularly attacked and killed by Great White Sharks in False Bay.

During our stay, and the day before Peg and Amy went on a shark cage diving trip to Hermanus , a South African body boarding team member David Lilienfield was killed by a Great White on 19th April at Caves, in Kogel Bay. The Mail and Guardian reported,

The shark made three passes at him and bit his right leg on the third pass. He died in the water from a loss of blood and his body washed up on the shore.

There was some controversy over the attack because some people believied that research activities, including tagging Great Whites, may have disturbed them and brought them closer into the shore (see M&G here). And this unlucky Brit who didn't hear the shark siren because there was a power cut at the time lost both his legs at Fish Hoek.

For more on the Penguins at Simon's Town go to Penguins.

Simon's Town was the base of the British Navy in the Cape Colony from its construction completed in 1814. It played an important role in guardianship of the exiled Napoleon Bonaparte on St Helena, as a supply base in the Anglo-Boer Wars and during the first and second World Wars. The base was handed over to the South African Navy in 1957.

Simon's Town was declared a White Group Area in 1967,

'and over the next few years the coloured people, whose family ties sometimes went back to the very early days of the town's growth, were moved  away. Their houses in and behind the town fell into disrepair and a lot of them were eventually bulldozed flat.'

(for more on its history see Simon's Town Historical Society.) 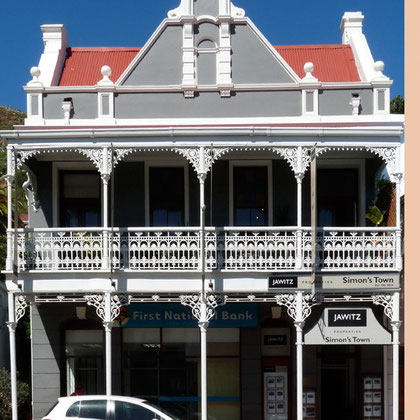 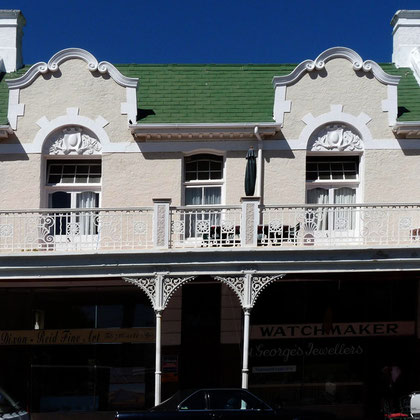 To Cape of Good Hope