When you leave the Cape of Good Hope section of the Table Mountain National Park you can turn left or right on the Plateau Road. Left takes you back to Scarbourough and up the west side of the Peninsula.  Right takes you over the top of Smitswinkel Bay and round a headland onto the east side of the peninsula and the road to Simon's Town. That day we luckily turned right.

The park exits into a wild and windblown landscape; a shallow upraised pass with harsh rocky hills aligned to catch the full blast of the prevailing south-easterlies. On the left the big lay-by market of Southern African arts and handicrafts was packing up. The sparse eucalyptus shelter belt on the other side of the road rocked in the gale.

Time was getting on and the sun was sinking into the late summer sky. We'd turned right to get some supplies and pick up the M3 beyond Muizenburg for the University campus and Tamberskloof. Way out on the Cape at this hour the traffic was light to non-existent.

We had already lucked-in that day by seeing one of the three Cape mountain zebra in the park and coming across a beautiful wooden walkway through the fynbos down to a bay of brilliant white wind-blown sand and monster kelp.  It had been a long day and we were happy to be going home.

One dolphin? I can see hundreds and hundreds of dolphins!'

The sea in Smitswinkel Bay was no longer the Mediterranean turquoise and cobalt of previous trips but a mottled Payne's grey of whipped water and shifting currents.

As we rounded the point that opens into the False Bay we plunged into the deep shadow of early evening. The Bay itself was still in hazy sunshine and as we followed the tight curves above the crashing ocean we began to see a huge flock of wheeling birds in front of a moored bulk carrier. They were thousands upon thousands of Cape Gannets and even from a distance they were clearly in a feeding frenzy.

I pulled the car into a gravel lay-by and we leapt out with binoculars and cameras to see what was going on. Peg had the best pair of binoculars and to Jo's comments that she thought she might see a dolphin Peg replied, ' One dolphin? I can see hundreds and hundreds of dolphins!'

I don't know how far away the action was - maybe half a mile to a mile. And it was taking place on the line where the shadow cast by the Cape mountains met the low sunlight lighting up the gannets.  We watched in utter amazement as the thousands of dolphin and gannets moved across the surface of False Bay diving and leaping after an invisible prey.

I knelt down in the the lay-by to try and steady my camera on a short wooden bollard. The sharp gravel worked its way into my exposed knee cap but the pain was as nothing to the sheer exhilaration of the scene unfolding before us.

Cars passed by on the road, apparently oblivious to the turmoil we could see through our lenses.  The whole great mass of dolphins plus gannets and who knows what other predators beneath water's surface moved in a southerly direction along the edge of the bay.  Gradually the gannets moved away and the leaping and pursuit of the dolphins subsided. In all four and half minutes had passed from when we first stopped the car. 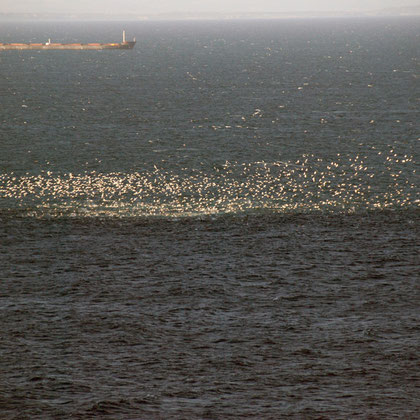 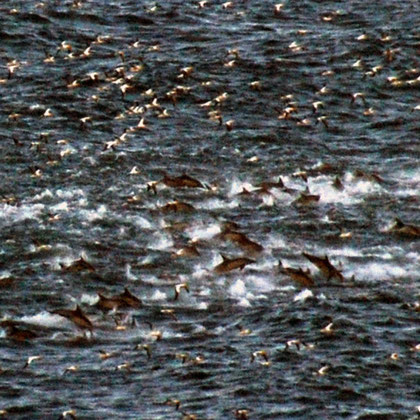 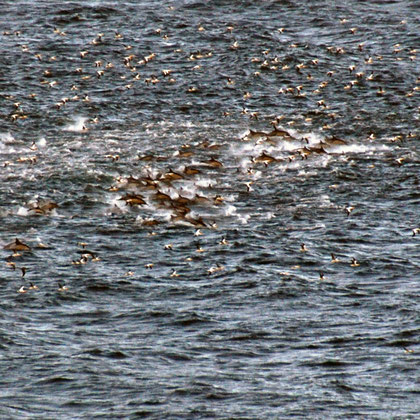 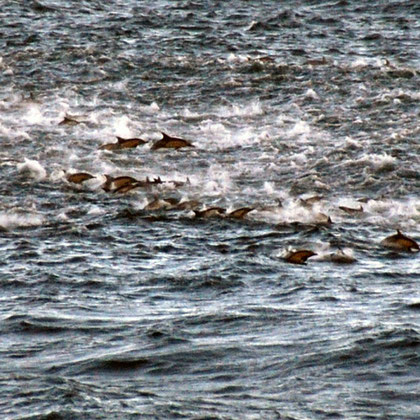 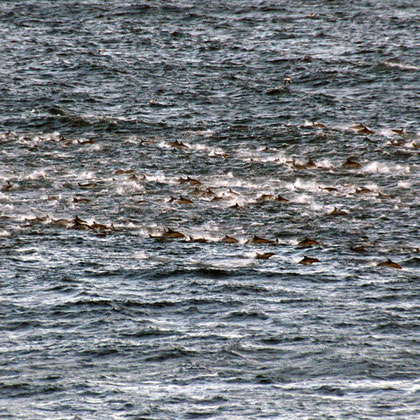 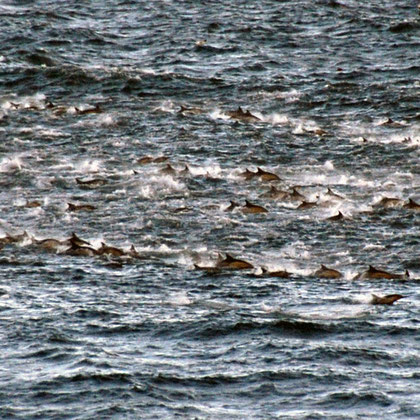 I'm not sure what we were witnessing in mid-April. Maybe it was an early arrival of an outlier of the Sardine Run.  This does not start until May and occurs further east along the Eastern Cape and Kwazulu-Natal coasts.

Having looked at the video clips below it seems to me the dolphin are moving too fast across the water to be rounding up sardines into the classic baitball. Maybe they were chasing a faster moving fish but that was small enough to interest the gannets.

The sardine run occurs when billions of Southern African pilchard Sardinops sagax – spawn in the cool waters of the Agulhas Bank and move northward along the east coast of South Africa.

The Sardine Run brings together a mass of a mammalian (dolphins, seals, seals) avian (gannets, terns, gulls) and pescatorial (sharks, bluefin, king mackerel) predators and is one of the outstanding wildlife spectacles on the earth.

Here are some great You Tube clips of the Sardine run.  The first by Charles Maxwell (above) captures something of the frenzy inside the bait ball where whales, shark, dolphins and gannets are at work.

The second by Mark van Coller (below) is almost hallucinogenic with fantastic shots of the sardines grouping and breaking away as sharks and dolphins swim at what seems a leisurely  pace through them. This was shot further east off the coast of the Transkei.

The best above-and -below sequence is the last from a David Attenborough-narrated programme. No details are provided on You Tube and it may disappear.  As Attenborough concludes, 'The spectacle of the annual Sardine run is the greatest gathering of predators on the planet.'

Strangely though, none of these clips seems to have the fury on the surface of the water that we witnessed that day.