III. The Sanctuary of Aphrodite at Palaepaphos

I wondered with this page if I could get away without the hard scrabble of descriptive writing. Something more impressionistic. I was struck by how disconnected I felt from the experience I had had.

Sometimes you have to try and think back. Or feel yourself back into that place. Most places I have been in for little more or less than an hour. And yet some make an impression that feels life-changing. Or affirming.

Then I go back to the photos. And it all feels flat.  I feel slightly foolish.  I can't bridge the way I felt in the place and the way I feel now. Maybe that is the power of a place. It is, after all, a three-dimensional, five-sense experience. Sight, smell, hearing, touch, taste. The restless eye beyond the ken of the camera's stupid, blinking lens. Wind, sky, smell, the distant and far sounds, the eye roaming wide and intensely close-up. And it all comes in a continuum of time. Of energy. Being in the car, cramped, endlessly attentive. Anticipatory. Snatching glimpses. Road and view. Road and view. Road and car approaching. And then released. Like a kid on a wide, broad, windy, empty beach.

It was just a great expanse of flatness with sea (restless, shining) and sky (whizzing, changing) beyond. Shards and stones and scraggly plants pushing up in the January day. The sun arcing in its short hours. A sheered, planed, stage-like, bounded space. Dark trees against the glittering skyline. Irrigated  by the summer-long waters of the Diarrhizos from the High Troodos. Warmed by pine coals from the Oreites Forest. Cooled by sea breezes.

The massive blocks of stone immovable in the breeze. The Late Bronze Age sacred Temenos built from monumental limestone walls. Time and space stretching away. Drawing me in. Pathways and non-pathways. Nothing cordonned off. Free to wander like my mind. Whipped away by some other sense of place.  Backwards into an impossible past.

And when the goddess gave out the church stepped in, with God, planted itself in its squat ceremony beside the sanctuary's side. Painted with Jesu birth and the networked lines back to the mother church at Bosphorous gate, Constantinople, the eastern Rome. When all had changed again and Hellenic links came in fresco-ed reds and ochre-greens. Dark thoughts on dark walls, gilding lighting all.

And when the church tired came industry and trade. Water, sugar cane and constructed stone. The great plantation built upon the idol's mound. Careless of past and sensibility. The arrogant kings and Cyprus queen. Catholics from a distant land. The accumulating scurf, piling up metres high. Lifting the place above itself. Affording the wind more purchase. Burying the goddess beneath the onward rush (see my 'Sweet Salt' page for the sugar industry run from the Royal Manor House of Couvoucle).

And last the villa-wave, the concrete ship, the laughing-juice strip. The roaring motorway. The landing lights and cabin crews of satellite homes and unbelonging. The last link between hand and heart and soil and place snapped. The last candles lit to the Panayia Galaktariotissa (the milk-giving virgin). The planes roaring in. Kids playing in the chlorine waters of Paphos Aphrodite Water Park.

The Paphian Sanctuary of Aphrodite was ‘one of the great religious centres of the Greek and Roman world’ (p.31). But thorough investigation of the site only began in the 1970s. It is sited on a splendid flat-topped limestone hill that rises gently from the fertile coastal plain watered by the summer-long waters of the Diarrhizos from the High Troodos.

The site consists of two sanctuaries built about 1300 years apart. The first was constructed in about 1200BC in the Late Bronze Age and consisted of an open Temenos (sacred enclosure) built from massive blocks of limestone (which would have housed an altar) and a large, flat-roofed, pillared hall.

The nature of the goddess worshipped at this time is not known. Clay Astarte-type figurines found on the site suggest a connection with an indigenous Cypriot fertility cult dating back to Neolithic times. This cult may then have been ‘transformed by immigrants from the Aegean’ into a specific Aphrodite cult (Maier, F. (2010) Guide to Palaipaphos (Kouklia), Bank of Cyprus Cultural Foundation, Nicosia: p.45).

The Roman buildings dated after the earthquake of AD 76/7 consist of an open courtyard surrounded by a north hall, an east wing and a south Stoa.

Details of the Panagia Katholiki church 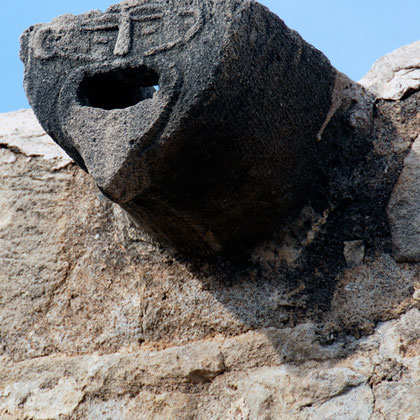 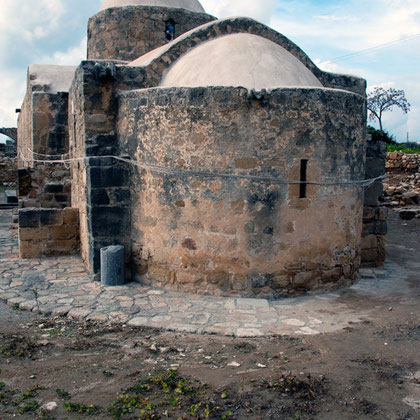 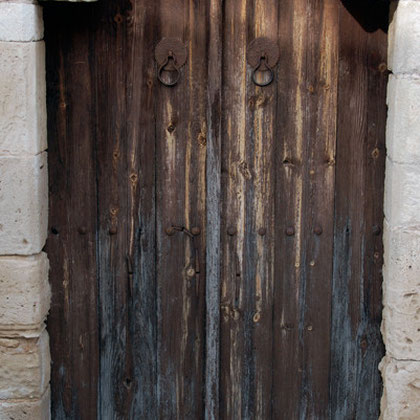 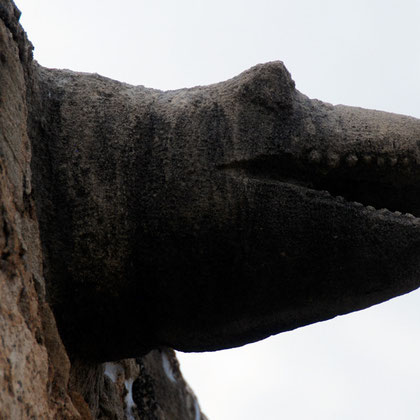 Plants at the Sanctuary site, January 2013 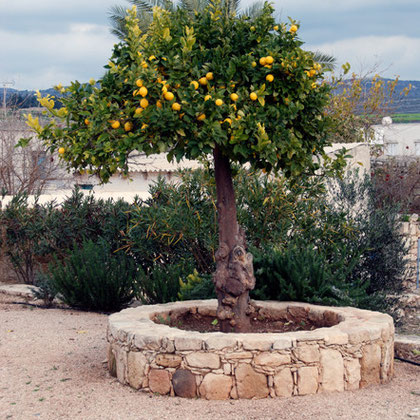 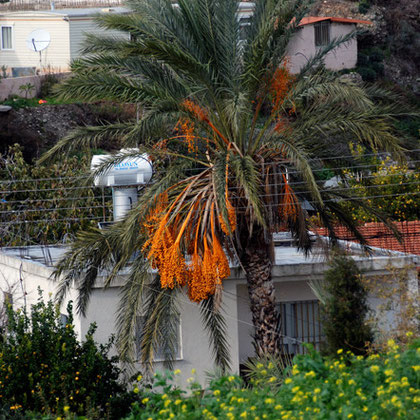 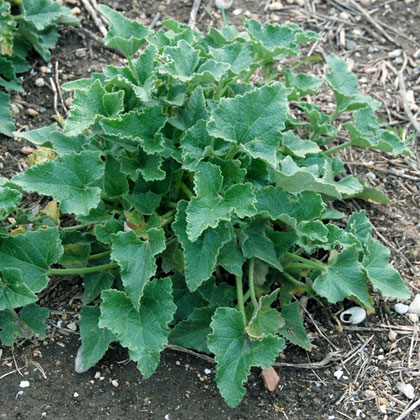 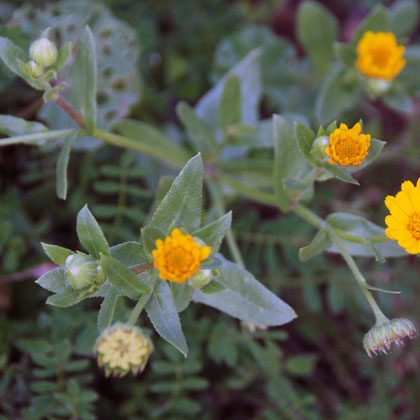 We said goodbye to the attendant and his family, who had come up from the village to share cake and warmth from the gatehouse's heater, and got back in the car. Hungry and exhilarated I imposed one more stop to take pictures of the Panagia Katholiki before we joined the A6 motorway by the Research Station of the Agricultural Institute and headed for Petra tou Romiou, the birthplace of Aphrodite (see my page here).

We had a meal at the CTO restaurant above the bay. A welcoming wood-fire was roaring away but it was still cold sitting by the huge windows overlooking the bay. We watched the sun set through the racing clouds and ate meze and fresh fish (Grouper - which was very good). There were not many people in the restaurant.

A sophisticated couple with their teenage daughter switched languages from Greek to French to Arabic and English with such fluidity it was impossible to place them. I thought maybe they were Lebanese or Syrian or Armenian. They puffed away on fags non-stop.

The charming older waiter showed us the collection of songbirds and claimed that he had a grouse 'like the whiskey' but it was a partridge. I kept schtum and ate my fish, trying to make the single glass of wine last.

As the light faded we got back into the car and drove the hour-long drive back to Nicosia. It had been a good day.

See also The Cult of Aphrodite