We pitched up at Scarborough Bay on our first outing from Cape Town. We'd up over the ridge of the mountains behind Tamboerskloof and dropped won precipitously into Camps Bay and driven down the peninsula through Hout Bay and over the Chapman's Peak Drive (see separate page here). We stopped at Monkey Valley, on the insistence of our host, and took a cup of coffee on the veranda of the inn. It was a stange place, festooned in a mantle of close, dark trees.

We proceeded through Sunny Valley, which was first beautiful lush pastures, old graceful oak trees and horses and then became more urban and more black African. We didn't know at that time that we were passing Masiphumelele township (see this page for more). We skirted Koertjie and took the empty coast road for Scarborough. We bumped down over the startlingly red ballast of the car park and pulled up at the exhilerating view of Mossel Bay.

Scarborough sits off by itself down the Peninsula and feels like a village, although it seemed to have no shops.  The houses are relatively new and step back up the dramatic and very steep rocky mountain that comes marching down to the coast.

It is communtable to Cape Town but far enough away to have apparently escaped the pressures of urbanisation. In fact, I later realised that it is not so far way from an informal township  to the Red Hill Road to the east. On our second visit I used the public toilets and was surprised to find a large box of condoms in it, a sign of the struggle against HIV/Aids.

The beach at Scarborough's Mossel Bay is stunning. The brilliant white sand arcs round to a rocky headland; the deep blue sky meets the shining, ebullient sea that stretches away and away into endless ocean.

The rockpools are a dramatic world in themselves and are home to millinos of tiny mussels, limpits and wonderful rockpooly things. On our second visit a big Cape Chacma baboon came boldy (at least to me) out of the rockpools, moved nonchalantly over the bronze-red boulders, stopped to sit, leant against the warm rocks, to eat something he'd found, and then bounded off. 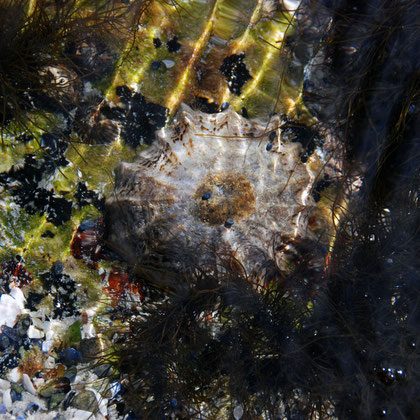 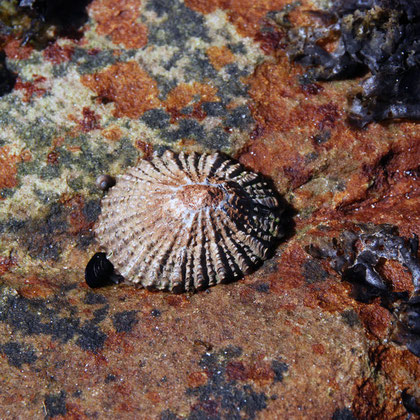 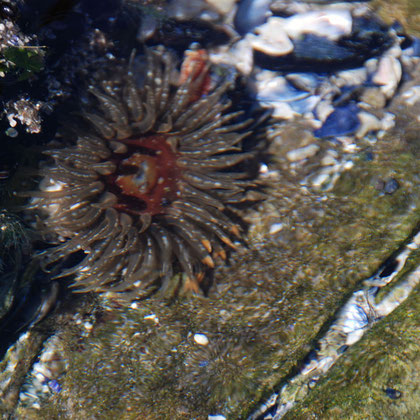 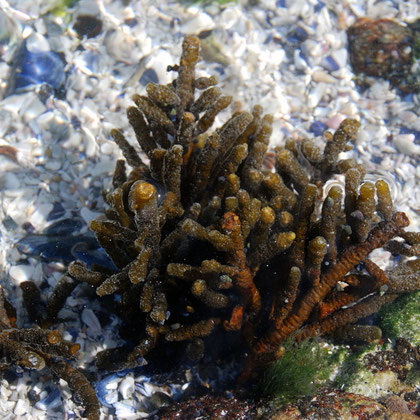 I later learnt that there is a war between Scarborough residents and the local baboon troop and that a group of residents had been given permission to fire paint balls at the baboons to 'deter' them.  As we left Scarborough we saw some uniformed people, who I thought were some kind of private security force, but they were the baboon minders (see Baboons page).

The sequence of photos below shows the baboon and the wound he has on his nose. 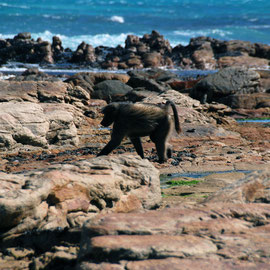 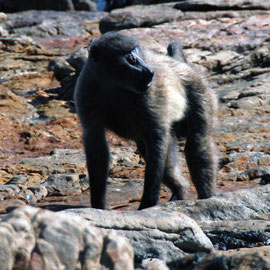 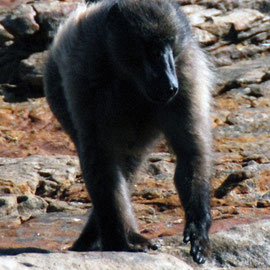 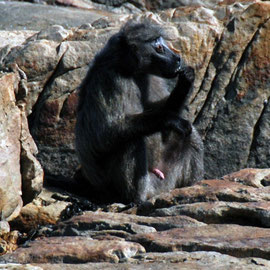 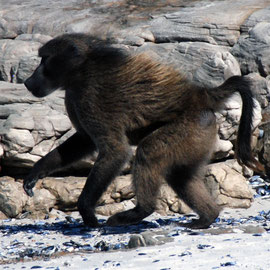 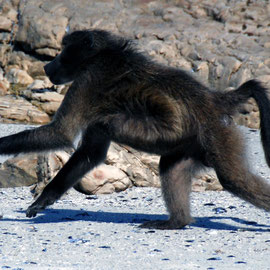 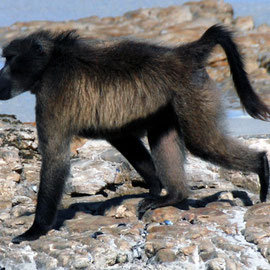 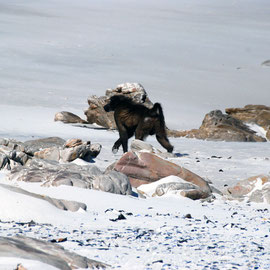 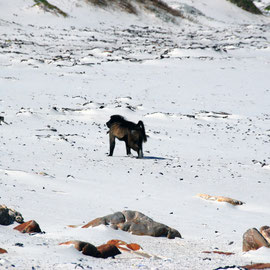 The seas of the Cape Peninsula are immensely rich and the subject of incredible events such as the sardine run (see Dolphins page) and the visit of whales that come right into False Bay and move along the west side of the Peninsula (see Chapman’s Peak Drive). They are also home to thousands of Cape Fur Seals, African Penguins and more controversially, the Great White Shark.

The source of the Ocean’s richness are the Aghulas and Benguela currents. These currents meet and mix at the foot of Africa. Whilst the Aghulas current is warm and originates in the Indian Ocean the Benguela is cold and is made up of a mix of Atlantic waters. It flows northward up Africa’s west coast to Angola, is 200-300km wide and draws water up from a depth of 200-300m.

These upwelling pulses, that occur roughly every 10 days, create the vast meadows of phytoplankton. These develop from spores in the upper layers of the water column and are brought up from the deep ocean by the upwelling currents created by the effect of the prevailing south-easterly winds that blow over the west coast , creating an offshore current that drags nutrient rich, cold water up the continental shelf and to the ocean’s surface.

During the blooms of phytoplankton the nutrient content of the surface waters are ‘30 to 65 times more productive per unit area than the global ocean average.’ (see Benguela Current). These rich blooms in turn feed zooplankton and fish and sea-mammal life. Sardines and Anchovies were once super-abundant. In 1968 landings of the former peaked at 1.3 million tons and have been the basis of fishing and fish processing at fishing harbours like Hout Bay. More recently the sardine fishery has declined through over-fishing and anchovies have become more important.

This beneficial phenomenon can also result in dangerous blooms of phytoplankton that suck all the oxygen out of the sea water through the aerobic decay of the plankton leaving fish and the Cape’s rock lobsters (a type of crayfish) literally gasping for air. This can result in the mass exit of the lobsters as they crawl from the sea in search of oxygen.

The red tides usually occur in lulls after south-easterly gales when a mass of phytoplankton are brought to life but the offshore current then fails and they accumulate in a massive stagnant cloud. This can also lead to a black tide, where the plankton die off and first use up the oxygen in the sea water through aerobic decay and then as they sink to the sea floor anaerobic decay creates toxic hydrogen sulphide. In 1994 an upwelling event in St Helena Bay killed 1500 tons of fish and 60 tons of rock lobster. It took four years for the area to recover.

In recent years local authorities have launched spectacular rescue efforts to save and relocate thousands of rock lobsters during red tides.

To Kommetjie, Hout Bay and Clifton