It is amazing how quickly we become blase about Ostriches(Struthio camelus). Because we have seen them in zoos, in ostrich farms, on countless TV documentaries. And yet here they were in the 'wild', just wandering about being ostriches.

The ostrich is the largest (up to 150kg), tallest (up to 2.75m) bird, laying the largest egg, and has eyes that are said to be the largest of any land vertebrate – 50 mm in diameter.

They can tolerate huge daily temperature variations - 40C; are incredibly adaptable to different climates and can run up to 70km/hr for 30 minutes. In contrast to all other birds they secrete urine separately from faeces and the male has a copulatory organ, which is retractable and 20 cm long.

Ostriches do not bury their heads in the sand but get out of trouble by either running, lying flat on the ground or standing and fighting with their strong legs capable of delivering a forwards-only killer blow. That such a big bird could think it could hide by lying down! But in fact their acute eyesight, which allows them to see predators from afar, and the heat haze prevalent in ostrich habitats can reduce them to a formless lump on the horizon.

Ostriches lay their eggs in a communal nest.  The dominant hen discards some of the eggs.  Each hen can regonise her own eggs in the communal nest. The females incubate the eggs during the day - and being drab in colour - are hard to see. The males take their turn at night - and being black- are almost impossible to see.

Ostrich eggs have been used as water carriers by human for 60,000 years and are still used as such by Kalahari bushmen. Their feathers, meat and skins (for leather) have been prized and the rage for ostrich feathers almost led to their extinction.  There are estimated to be 700,000 ostriches in captivity while their wild population declines. (Wikipedia Ostrich).

Bushmen creation stories feature an Ostrich Woman as custodian of the First Fire who kept the embers alight under her apron or wings. There are also many Bushman medicinal uses of Ostrich parts.  Necklaces of the ostrich eggs were worn by babies to make them strong by imbuing Ostrich potency (see Low, 2011 p.302)

Oudtshoorn, in the Little Karoo, has the largest population of ostriches in the world. It experienced two Ostrich feather booms between 1875-85 and 1902-13. The demise of the industry was blamed on the motor car which made wearing flamboyant hats problematic. The second boom funded the building of so-called 'Feather Palaces" (you can stay in one here).  The town was known as the 'Jerusalem of South Africa' and 300 Lithuanian Jewish families emigrated to it during the height of the second ostrich boom (see Seligman.org). 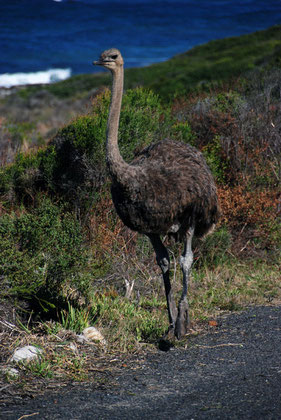 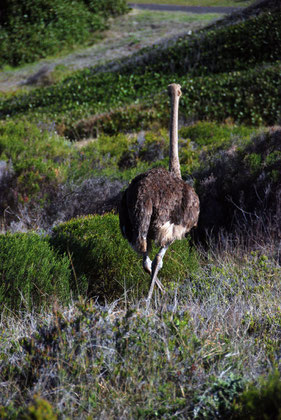