I find it amazing that anything can grow in the sterile and hostile terrains of glacial forelands. Seed is carried in either by the wind or animals (including on walkers' boots) and somehow finds a foothold in the rock debris, gravel and dust/fine sediment.

On the other hand, in the surrounding areas of rain forest and mountain scrub competition for soil, light and minerals is intense so for those that are able the open and virgin landscape left behind by glacial retreat is an opportunity.

By dint of really frustrating internet searches I have gradually identified some of  the plants below and accessed some interesting materials on plant progression on glacial forelands. But this page is still developing.

Specialists refers to the succession of plants on new soils as 'chronosequences' and different habitats - sometimes referred to as 'sere'  - open up very different succession possibilities. This is due to both the plants than can initially colonise these habitats and the soils that eventually develop and decay on them.

A 'seral community' (or sere) is an intermediate stage found in ecological succession in an ecosystem advancing towards its climax community ... A 'primary succession' describes those plant communities that occupy a site that has not previously been vegetated (Wikipedia: Seral community).

Glacial successions are described as 'lithoseres' as they take place on rock.

They start with lichens which can tolerate being dried out (dessication). Lichens produce acids that corrode the rock surface releasing nutrients. Windblown soil particles, humus etc collect around lichens and in cracks and depressions in the bare rock.

Lichens are amazing: they tolerate extreme conditions by combining two normally separate organisms - alga and fungus or cyanobacteria. And they can simply shut down their metabolism in dry periods and resume it when water is once more available. In Antarctica lichens have been found that photosynthesise at -23°C and overwinter in total darkness at -70°C (Te Ara: Lichens).

The alga can photosynthesise sugars from carbon dioxide and the fungus, 'protects the alga by retaining water, serving as a larger capture area for mineral nutrients and, in some cases, provides minerals obtained from the substrate' (Wikipedia: Lichens).

Their secretions and the formation of carbonic acid as a by-product of photosynthesis can erode rock surfaces and release nutrients. One 1970s study showed that lichens could corrode rock equivalent to fifteen times its own weight and that the mucilage of the lichens bound together newly formed soil particles to prohibit their wind and rain erosion (see Marathe, KV and Chaudari, PR (1975) An Example of Algae as Pioneers in the Lithosere and their Role in Rock Corrosion Journal of Ecology, Vol. 63, No. 1 p. 68).

Lichens gain their nutrients from airborne dust and water and some can fix atmospheric nitrogen.

New Zealand has more than its fair share of lichens: 'New Zealand lichens, in the light of present knowledge, number over 1300 species grouped into over 150 genera in approximately 43 families. Many are so polymorphic as to make their delimitation difficult and it may well be that some given specific rank may prove to be synonyms' (Martin, W. (1965) The Lichen Flora of New Zealand, Tuatara: Volume 13, Issue 2.)

The number of species had risen to 2,000 by 2014 - about 10% of the world's known lichens (but only 40% are endemic compared to the elevated endemism rate in New Zealand seed plants of 84% Te Ara Lichens).

The so-called 'Map lichen" (Rhizocarpon geographicum) is used by climatolgists to determine the relative age of glacial deposits. The bigger the lichen the longer it has been there basically. This is lichenometry.

The lichen stage is followed by the moss stage which colonises the fragile soil deposits built up by the lichens. Again there is a progression of mosses from the more drought tolerant (Polytrichum and Grimmi) to the moisture loving (Hypnum, Bryum).

Then come the herbs and grasses as decaying mosses increase the soil deposits particularly in cracks and crevasses where moisture is held and wind-erosion is limited. Annual grasses are followed by perennial grasses.

The first plants to grow on the fine gravels of moraine include mat-forming daisies, willow herbs (Epilobium species), lichens, hebes, tutahuna/scabweeds, grasses like the poa nouvae zelandiae and Racomitrium moss.

Everything here depends on cycles of growth and decay to provide a growing supply of nutrients. Root systems are also important to penetrate rock fissures and access substrate nutrients.

The herb stage is followed by the shrub stage although of course there is a huge overlap in the stages.

Within 8 years a shrubland develops that includes hebes like the koromiko, toetoe grass, the tree daisy/akeake and  tree tutu and broom (Carmichaelia arborea).

Larger plants with stronger root systems shade out previous stages and increase weathering and soil formation. These also include nitrogen-fixing plants like the native broom.

The tree stage starts with the development of the tree tutu, the rata and kamahi within 50 years of the withdrawal of the glaciers (see next page: Fox Glacier Rain Forest)

The tree stage that follows begins to establish mesophytic vegetation - that is, vegetation that require moderation in terms of heat and water supply. The mesophytes replace plants xerophytes that are drought-resistant plants.

In 100-150 years tree ferns and the giant podocarps begin to get established depending on the particular soils and drainage developed. Canopy trees include the rimu, the thin-barked totara, the matai and kahikatea (see my Tree pages for details of these and their habitats). 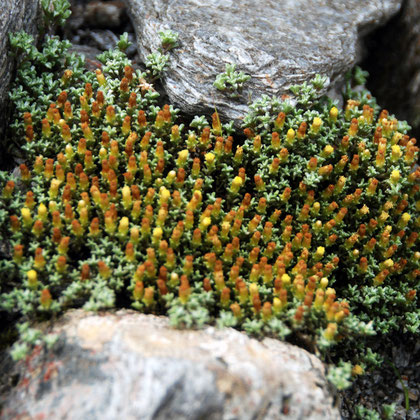 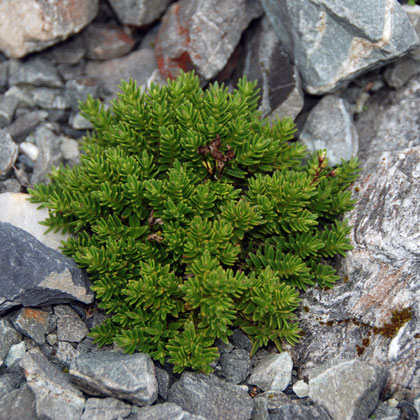 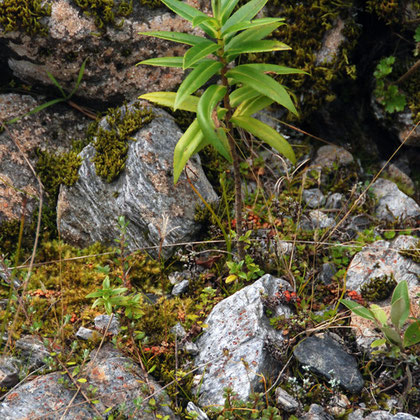 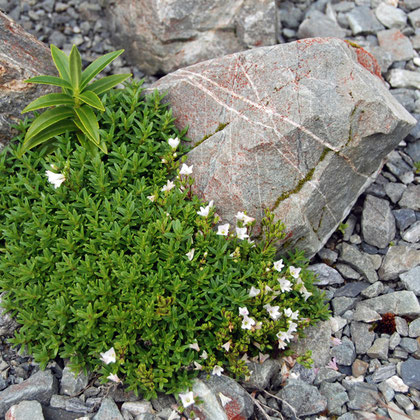 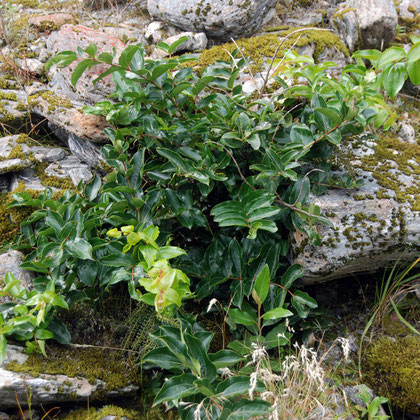 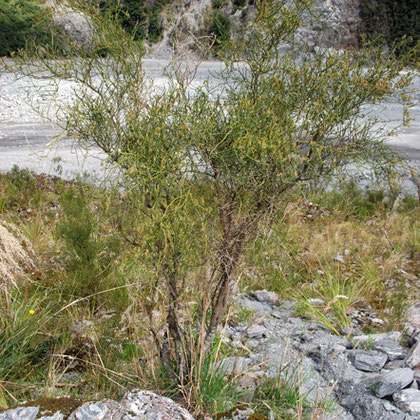 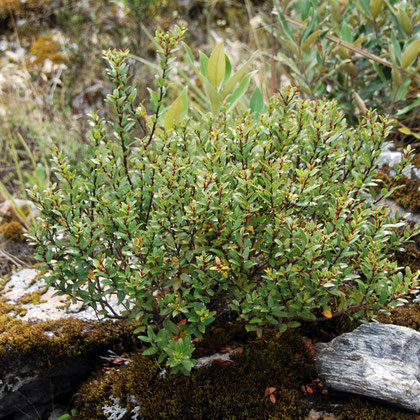 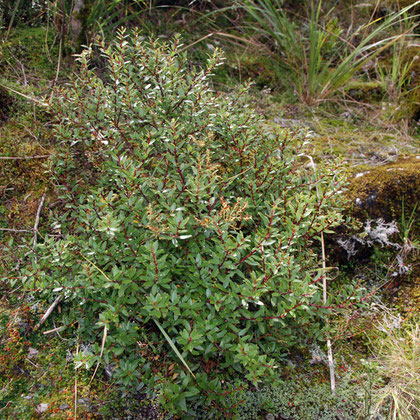 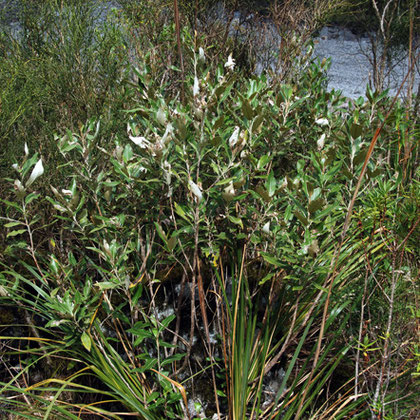 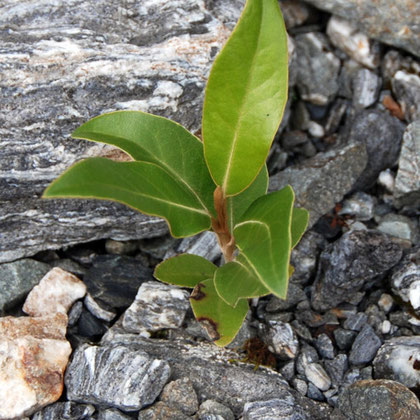 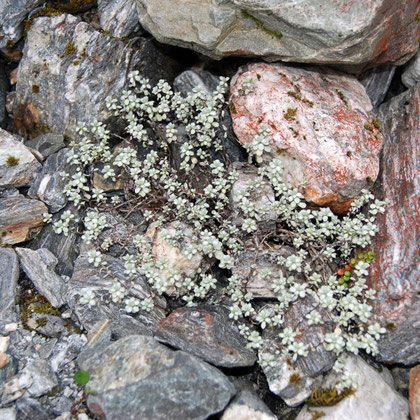 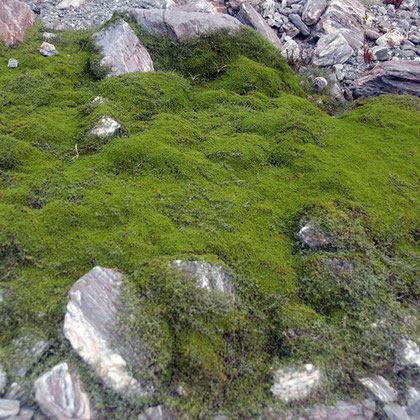 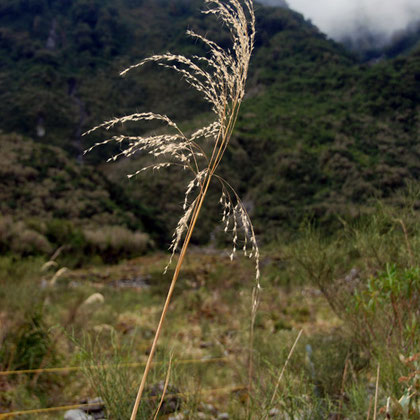 'As it grinds forward, the ice destroys vegetation in its path.When it retreats, plants begin to colonise the open spaces left behind. Levels of growth show as distinct lines—trimlines—in the vegetation on the valley walls.'

The soils of the Fox Glacier area and the glaciated West Coast are particularly affected by climate and time.

The climatic characteristic of note is the exceptional rainfall of the Southern Alps. This progressively leaches nutrients downwards until they are inaccessible to plants and often hidden below an impervious iron-pan.

Soils develop quickly on bare rock under conditions of intense erosion. Within 150 years deep black soils can develop on moraines through a progression of nitrogen-fixing herbs, grasses and shrubs that gives way to rata-kamahi forests.

These in turn give way to rimu forest in 3,000 years but soil fertility is degrading as leaching and lack of rejuvenation play their part. Beyond 20,000 years Rimu forests become stunted and give way to silver and bog pine, low heathland and tussock.

The most fertile soils are those that are subject to rejuvenation through flooding and the arrival of new debris and gravels that reignite the process of soil formation by releasing new supplies of phosphorous and by building nitrogen supplies.

This occurs in river valleys and alluvial plains and it is here that nutrient-demanding trees like the totara, kahikatea (and silver and red beeches further south beyond the 'beech gap') occur.

Hillside soils are constantly exposed to downslope flushing and slips  and landslides which expose fresh rock to soil development.

So called 'steepland' soils are of medium fertility and can support red and silver beech and nutrient-demanding hardwoods like ribbonwood, wineberry, pigeonwood and mahoe (Melicytus ramiflorus).

Generally then, the soils of Westland and Fiordland are some of the most infertile in the world. Their nutrient store is held in living plant organisms and once stripped away it is gone, if not forever, then for a longer-time horizon than makes sense to commercial and agricultural enterprise (see McSweeney, G. Soils of the South West in Forest, Fiords and Glaciers RFBP 1987).

New Zealand's glacial dusts contain iron that is far more soluble than other dusts and this may have had an important effect in producing phytoplankton blooms that may have pushed the Earth into the last ice age.