If the site of ancient Kourion were a municipal park it would be stunning. Set on a high bluff above south coast of Cyprus it gives spectacular views along the rugged coast westwards, the Akrotiri peninsula to the east, and the beach and plots of intensive market gardening on the coastal shelf below. Beyond the cobalt and emerald blues of the scudding sea suck out to a shimmering, expectant horizon.

The site itself is a flat plateau with sharply defined cliff edges.  Behind the land falls away into the steep Kouris river valley before the dry, scrubby, ochre hills rise up and merge into the distant Troodos mountains. It catches the booming south-easterly shore breeze and sparkles in the dancing reflected light from the sea.  On a cold winter day with a north-easterly gale blowing down off the mountains it would be miserable but on a bright blowy day in June it was exhilarating beyond compare.

It is ironic that the stark beauty of the Kourion site is in part due to the proximity of the Akrotiri Sovereign Base Area.  The British administration of the Akrotiri peninsula and shoreline to Kourion has halted development on what would otherwise be prime tourist real estate.  Without it Kourion would now be part of the sprawling villa-land of Greater Limassol/Limassolgrad.

Whether this unintended consequence of the British administration and ownership (of 40% of the SBA land) justifies the continued limitation and compromise of Cypriot sovereignty over independent Cyprus is a moot point.

We started our visit with a fish mezze lunch at the middle taverna of the three on the beach below Kourion. A boisterous wind was howling in from the south west, whipping up the turquoise sea with dashing whitecaps. Winds surfers and kite boarders were belting through the chop throwing spectacular leaps into the dazzling sky.

The meal was good but lacked the touches of our friend in Larnaca - no soup, fish souffle, shredded crab or fried bread with sea salt. But after a frustrating morning and a hot drive down from Nicosia the food and wine were a tonic.

The tourist season will see the beaches here chock full but now it was quiet. Half a dozen bikini-clad lovelies the stinging sand on sun beds in the lee of the tavernas.

As we left a big yellow Volvo digger was biting through the high windbreak hedge of a smallholding opposite the restaurant and looked poised to mash up the shack that in different guises had provided shelter for countless generations of growers over the millennia.

The lower part of the Kourion site, approached by a steep path that skirts the soft, honey-combed sandstone cliffs, is dominated by house of Eustolios - an early Roman dwelling drastically altered in the 3rd and 4th centuries AD - and the Roman Amphitheatre.

The House of Eustolis is covered by a spanned awning that gives spectacular views to the surrounding country and sea. The major draw of the very substantial set of low walls and water systems is the mosaics. 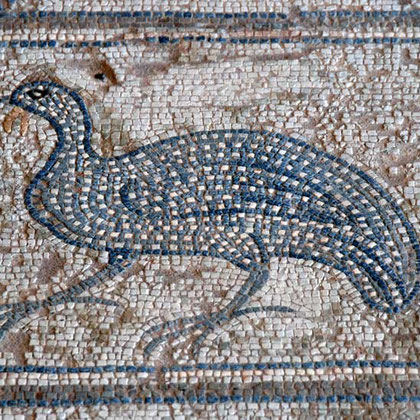 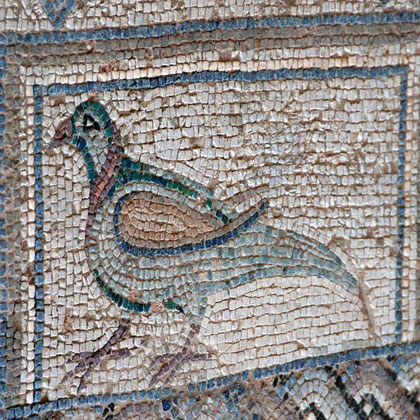 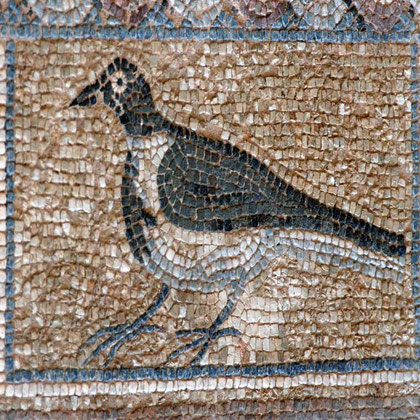 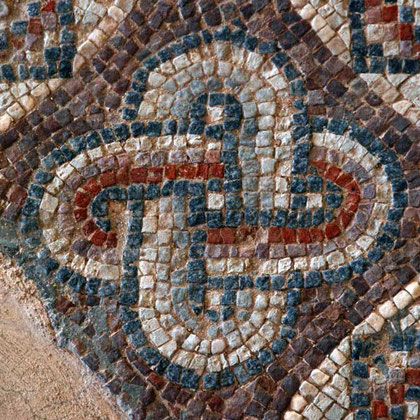 The amphitheatre was being rocked both by the wind and a UK jazz band in rehearsal for a show later in the week. It was a strange juxtaposition given some pungency by three dancers practising their dance routine.  The open side of the amphitheatre provides stunning views.

The upper part of the ancient city site is made up of the ruins of a Roman agora, a bath and fountain house (Nymphaeum), the Gladiators’ House and a fifth century basilica, baptistry and bishops’ house.

Kourion was destroyed in a cataclysmic earthquake in 365AD (see my page Seismic Activity).

Much of the site is protected by fences and raised wooden walkways but it is possible to walk through the ancient streets of the other parts of it and to walk around the edge of the Nymphaeum (fountain-house).

To me the site, with its bleached-white and weathered remains of marble and limestone pillars, blocks and capitols felt like a fantastic random sculpture park. Its very disorder, the way in which pillar capitals had been recycled as mere building blocks in later walls brought it to life.

The history of Kourion and the Kouris valley stretches back to the first recorded site of human habitation in Cyprus in rock caves in the Akrotiri peninsula 10 millennia ago. There is also much evidence of a thriving Bronze Age in the Kouris valley.

A city developed at Kourion with the arrival of the Mycenaeans in the 13th and 12th centuries BC from what is now the southern Greek mainland. In the Cypriot rebellion against Persian rule Kourion's King Stasanor sided with the Persians and ensured the rebellion's defeat.  Later, the kingdom joined with Alexander the Great's fight against the the Persian empire and was on the winning side of its downfall in 333BC.

The town continued to flourish under Roman and Byzantine rule and the surface remains of the site are largely from these eras.

Kourion has been a magnet for 19th and 20th century collectors and archeologists.  It fatefully received the rapacious attentions of the notorious archeologist-cum-looter, Luigi Palma de Cesnola, who was to become the Director of New York's Metropolitan Museum on the back of his robbed treasures from Cyprus (see Buying and Selling the Past.)

He ferried an immense hoard of antiquities from different sites in Cyprus - Idalion, Tomassos, Kourion - to the highest bidder, eventually the Metropolitan Museum of New York, among which was the 'Curium Treasure'.

Cesnola's claim that the treasure was found in a single underground chamber has been questioned since it was first made (see for example this piece in the New York Times of June 3rd 1884).

Since the 19th century Kourion has been pored over by numerous archeological expeditions.  These have mainly focussed on the rock-cut tombs that honeycomb the surrounding hills and the flatter ground in the plain below.

Thomas Kiely, at the British Museum, has written a fascinating and detailed account of the various known excavations to have taken place at Kourion.

Kiely's account of the different excavations dismisses Cesnola's claims of the 'Curium Treasure' as 'largely an invention'. This did not stop the British Museum's  Director from trying to buy the 'Treasure' and other items for £12,000 (£750,000 in today's money). Eventually Censola sold it to the Metropolitan Museum of New York for $50,000. Such was the interest in the Treasure that Tiffany & Co produced a facsimile range of the more prestigious pieces.

British rule in Cyprus led to a number of museum-led excavations and the formation of commercial syndicates in 1883 by the expatriate British businessmen, J. W. Williamson and Charles Christian, 'who claimed to have made a 500% profit on their investment, demonstrating the lucrative nature of speculative excavation at this time.'

The British administration's own inspector, Max Ohnefalsch-Richter, had fingers in a number of different pies.  He excavated both on behalf of the Berlin Museum and for private clients at the same time as his official duties.  A mixing of roles that 'illustrates the ambiguous and contradictory attitudes towards antiquities on Cyprus at this time.'

The British Museum Turner Bequest excavations of 1895-6 were made possible by a £2,000 legacy from Miss Emma Turner of Oxford in 1892.  Between January and March 1895, the excavation team examined 118 tombs in five separate cemeteries at Kourion.

Typically for this period, the excavators were driven by an urge to discover 'Classical Greek' and (as the excavations progressed) 'Mycenaean' objects, to the neglect of the predominantly Cypriot culture of the area.

Many artefacts were discarded as being of little archeological or aesthetic interest. At another site - Amathus - where the obsession with Classical Greece also held sway large pottery finds were given to local women as water jars. Finds that were not registered were often given to private school collections in the UK - such as those given to Eton from this expedition.

However, and despite being heavily influenced by the cultural, historical and political assumptions of the time, the British Museum expedition of 1895-6 'helped to lay the groundwork for the development of Cypriot archaeology into a scientific discipline.' Phew.

The University of Pennsylvania Museum began the first 'truly modern' excavations of Kourion between in 1934 and 1953. But this too was 'driven by a quest to discover the Hellenic roots of ancient Kourion and their early interpretations were heavily influenced by this perspective'.

Excavations by both US universities and the Cyprus Department of Antiquities have continued ever since. More recent work, no longer driven by asserting Hellenistic connections between Cyprus and Classical Greece has,

'revealed a very long sequence of human occupation extending from the later Neolithic period down to the end of Antiquity, c. 5000 BC–AD 500 [including] the earliest known human site on Cyprus, the rock shelter at Aetokremnos on the southern coast of the Akrotiri peninsula in use during the tenth millennium BC.'

The history of archeological study at Kourion has shifted from its early unscientific, sometimes commercially-driven methods - often little more than organised looting for a hoped for return of 500% - to a more scientific approach that is more reflective of its own assumptions and goals.

This has developed over time to encompass 'a much longer and richer story of human occupation [of the Kouris valley] extending over thousands of years from the ninth millennium BC through to the Late Roman period.'

The pressures of the development of the island, with motorway and dam construction and pressures on the Kouris Valley for commercial, residential and touristic purposes have driven forward current excavations and survey work and 'is likely to change our understanding of the history of the Kouris valley once again (see British Museum History of excavations in the Kourion area).

We left Kourion with the wind still blasting around the old marble.  A kestrel flew along the sea-ward ridge riding the updraughts and Alpine swifts called out their strange chattering cries way up in the sky. We never got to the sanctuary of Apollo Hylates or the Kourion museum.  That is for another time.