We saw the bull Eland below on a small headland along the dramatic Cape coastline at Buffels Bay towards Cape Point. It was a beautiful day with a deep, crystal clear, ultramarine sky, strong sun and a boisterous south-easterly wind blowing.

I spotted the bull Eland a quarter of a mile away, lying down behind a bank of fynbos sheltering from the wind.  A slightly sunken path, the favourable wind and the crashing of the sea allowed us to get within close range of the bull. The path towards him had the sharp, tangy smell of antelope urine.

I crept along exhilarated beyond measure to be out of the car and 'stalking' the great, and apparently gentle, beast. At a certain point he became aware of me and turned his head to see who I was.  He sat calmly, if warily, watching me take photos of him.

The Common Eland (Taurotragus oryx) is the biggest African antelope.  Males can be 1.6m tall and on average weigh 500-600kg. The Eland have spiralled horns.

The coat colours and markings vary: in Southern Africa they do not have the vertical stripes of their north African neighbours. Females have smooth tan coats whilst those of the male are bluish-grey and become greyer with age. The female Cape Eland (Taurotragus oryx oryx) has a tawny coat.

Elands are docile and have a mild temperament but startle easily.  They have been domesticated and provide good meat and pleasant-tasting milk. They are difficult to keep in captivity as they can jump 3 metres high.

The Eland is a strange looking antelope.  It has a body that looks more like that of a wild cow with the head of a deer stuck onto it.  This is recognised in its Latin name Taurotragus oryx, which literally means 'bull', 'goat', 'pickaxe'. The reference to the goat is due to apparently to the tuft of hair that grows in the eland's ear that resembles a goat's beard. The 'pickaxe' refers to the pointed horns of North African antelopes like the Common Eland and scimitar-horned Oryx.

The name 'Eland' is Dutch for "elk" or "moose."  The Khoisan or Khoesan name for Eland varies depending on the regional branch of the language.  In the Khakhea (Southern 5) language it is 'du' (where the 'u' has this symbol ~ over it) or 'duba' (see merritruhlen). But this is complicated further because their are different words in the Khoesan language for alive and dead animals. This is complicated still further by the five varieties of click sounds used in Khoesan languages and the challenges of transliterating these.  The clicks are dental (English tsk tsk), palatal, alveolar (cork popping), lateral, and bilabial (kiss) (merritruhlen above).

I thought maybe 'Kudu' was a non-Afrikaans name for an antelope but its Khoesan name is variously  k’a ̃ ̃ı,  xai,  xain,  xeiba,  and xaib. In the process I discovered that there is a wold championship for Kudu dung spitting ('bokdrol spoeg' in Afrikaans)! The world record in the sport is a distance of 15.56 metres, set in as of 2006 by Shaun van Rensburg.

The female Eland hang out in herds of up to 500 whereas the males tend to the solitary outside of the mating season.

Their preferred diet is a high-protein one of succulent leaves from flowering plants but they will graze grasses if they have to.  They generally browse in the early and late hours and rest-up during the day.  They get most of their water from their food and can conserve water by raising their body temperature. Their urine has a high-urea content (Common Eland).

There is a word -!ùm- meaning 'Eland' which is also referred to as ǁgúʻa sàʻã (literally "urine-smell face") referring to the marking behaviour of sexually mature eland which involves rubbing the forehead brush in urine.  Perhaps that is why the path along which I approached the bull Eland smelt so strongly, not to say redolently, of high-octane piss. It was quite remarkable in not having either the catty or washed-out ammonia smell of sheep. One might say it almost had 'citrus notes'.

Due to their docile nature Eland are vulnerable to hunting and poaching as can be seen in the horrible, self-serving video clip at the end of this section. 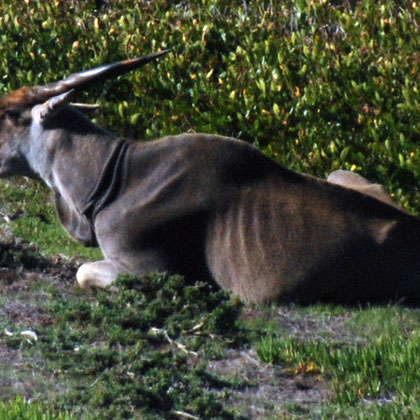 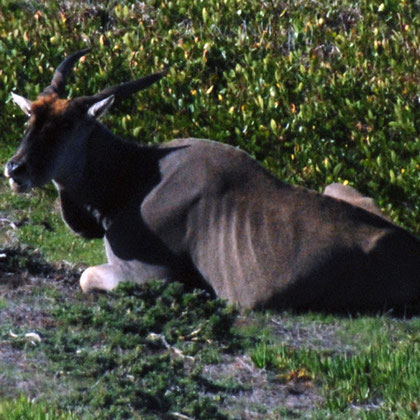 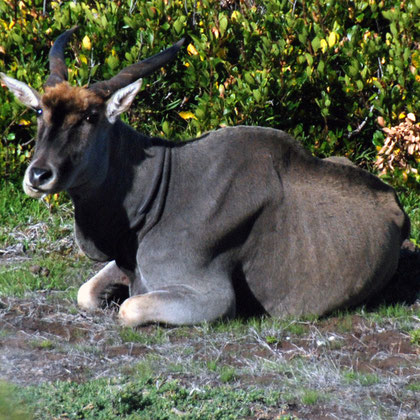 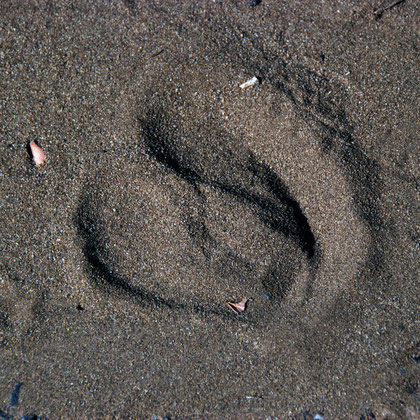 Amongst the San Bushmen the Eland was and still is believed to have more potency than any other animal and was their trickster-deity (/Kaggen's) favourite creature (Lewis-Williams and Challis, 2011 pp.168-9).

For the San the killing an Eland was a transgression that had to be assuaged by an act of purification that the potency of the animal itself provided.

The San bushmen are one of the oldest people's on earth, going back 60,000 years.

'They have genetic traces that no one else in the world has, that put them at the root of the human tree - we are related to them, but they are not as closely related to us. They have unique markers that we don’t have.'

Central to San culture is the power of dance and ritual.  In the Great Dance spiritual power is harnessed through trance. All San rock paintings depict fragments of this dance and the central place of animals in it, particularly the Eland.

San Rock paintings have been made for 27,000 years (for above see The Bradshaw Foundation).

Slideshow of female Eland at the West Coast National Park 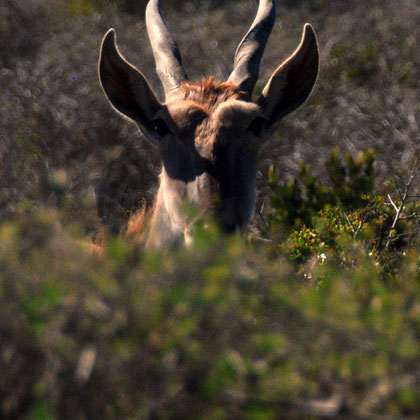 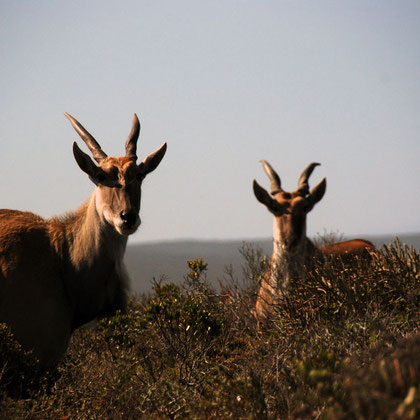 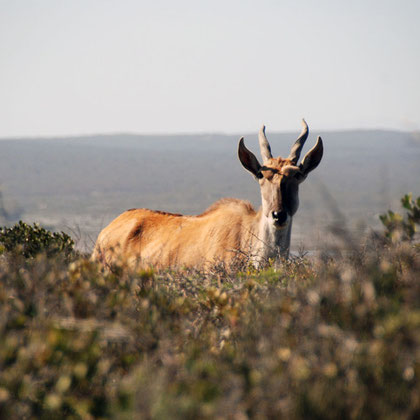 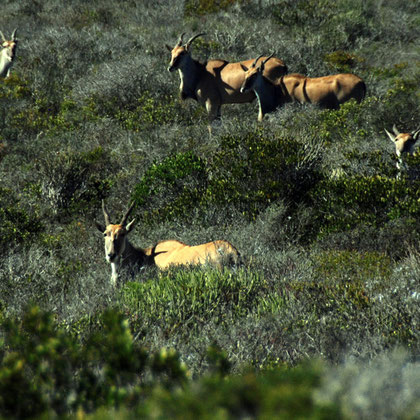 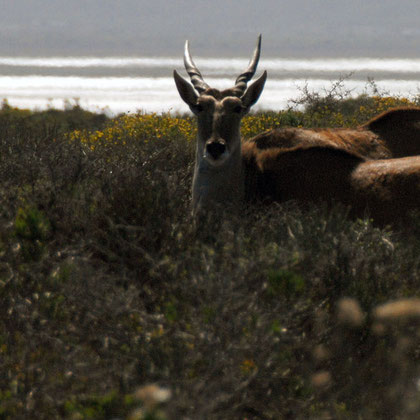 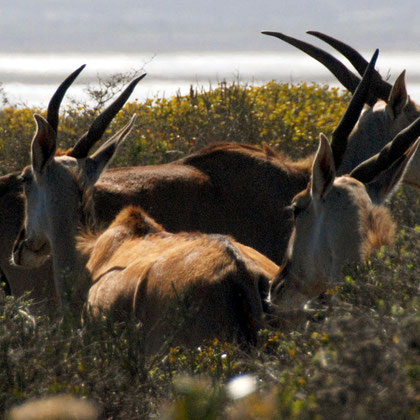 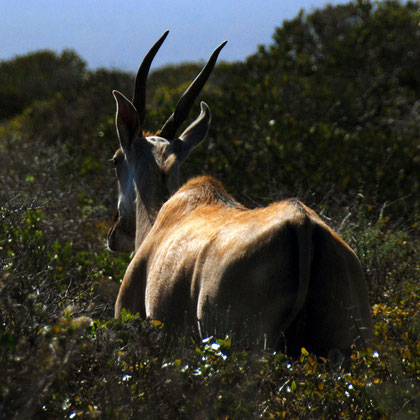 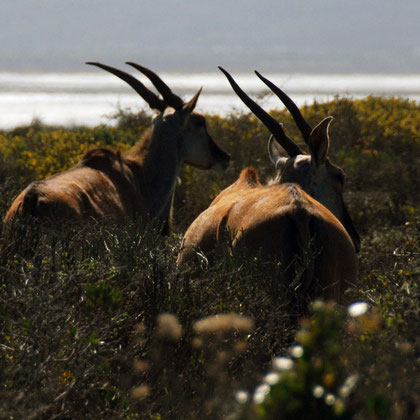 The Eland features in many San rituals. For example,

San Bushmen hunted Eland with bow and arrow, the arrows being smeared just below the tip (to avoid accidents) with a potent poison boiled down from a desert beetle larva.  The poison was slow to act on an antelope as large as the eland and a kill would involve many hours - sometimes day - of patient tracking.

The Eland is a central figure in San rock paintings. And there are many recorded medicinal uses of the Eland by the San people (see this list at Dr Chris Hewson Low's fascinating San website with beautiful San song sung by Edward Tsam, a Hai//om Bushman.)

Private game reserves and game hunting are big business in South Africa. At a recent game auction Cyril Ramaphosa, one time leader of the Democractic Union of Mineworkers and once tipped for the ANC leadership before Thabo Mbeki's rise to power, paid R15m (€ 1.471m) for game animals.

Ramaphosa owns the Phala Phala ranch near Bela-Bela, where he breeds buffalo, black and white impala and golden wilde­beest.  He says,

“It’s a beautiful industry to be in, not only for its investment potential, but because it also serves conservation. It is the aim of every top buffalo breeder to bring back into life bulls the size of the ones that were decimated by colonial hunters in the late 1800s.”