Etymology: Metrosideros = 'iron-hearted' due to the strength of the wood and

umbellata = the way the flowers grow as an umbrella shaped group of flowers originating from a single stem.

It does not grow as tall as northern rātā, usually only reaching 15 metres. It is widespread in the western South Island, on Stewart Island, and on the coastal edge of the Auckland Islands. In the North Island, it grows on the high peaks of Northland and Coromandel.

Southern rātā tolerates most soil types, including the limestone and toxic soils around Nelson.It is easily distinguished from the other tree rātā by its shiny leaves, which have many oil glands and a pointed tip. 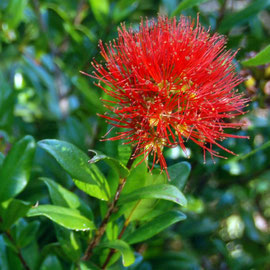 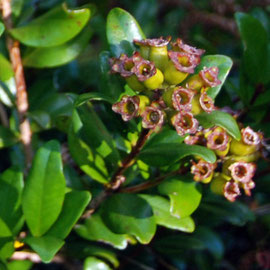 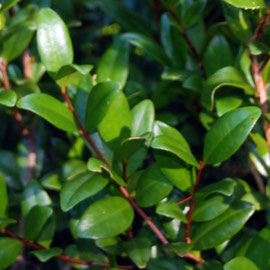 The Southern Rata is a major source of honey and the nectar is important for birds like Kākā, tui, and bellbirds.

This forest type is under serious threat by the brushtail possum (Trichosurus vulpecula Kerr), originally introcuded into New Zealand from Australia in the 19th century.

For the last forty years canopy dieback has become an increasing problem due to the voracious appetite and invasion southwards of the possum (see Magnitude of Canopy Dieback).

Weinmannia racemosa is a medium-sized tree of the family Cunoniaceae, is a very common tree in New Zealand, occurring in lowland, montane, and subalpine forests and shrubland from the central North Island south to Stewart Island.