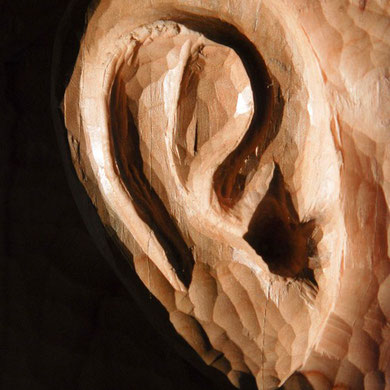 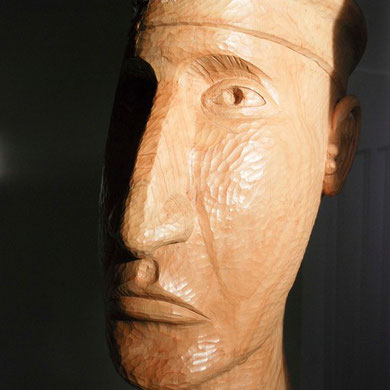 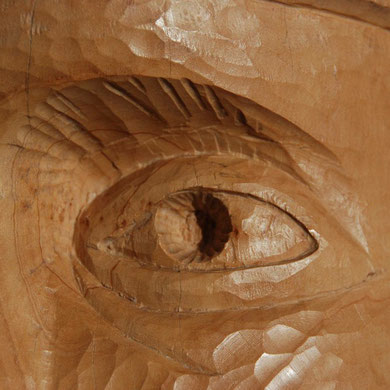 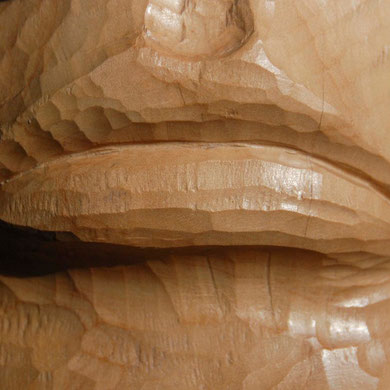 I carved Sailor (2011) out of a piece of a Monterrey Cypress that I found in the garden of our new house. It was from a tree that had overlooked the Dover Strait for much of the 20th century. Retrospectively, it could be said that I made this sculpture for the ordinary sailors who lost their lives in the turbulent, crowded, short seas of the Strait during the First World War serving in the Dover Patrol. And sort of for my dad. That is, these emerged as a themes as I chipped and hacked away at the great log.

My dad, Robert Gaw Murray, served in the US Navy in the Pacific campaign as a very young volunteer in World War II. He joined the Navy in the autumn of 1943 and trained as a radio operator at the Amphibious Training Base at Little Creek, Virginia. In February 1945 he was part of the crew of a large LST landing craft - known as 'Large, Slow-moving, Targets' - that hit a Japanese mine on February 15th in Mariveles Harbour during the landing of troops to retake the Baatan Peninsula in the Philippines.

He survived (2 Navy and 27 US Army personnel were killed) but contracted tuberculosis whilst waiting 9 months for his ship to be decommissioned in Subic Bay in the Phillipines (see extract from his letter above).(For more on my dad see Sum of the Parts.)

Baatan was the site of the Baatan Death March that took place after the surrender of Baatan to the Japanese Army on 9th April 1942.  This involved the forced march of 70,000 sick and starving Filipinos and Americans.  Fourteen thousand died on the march and 'untold thousands more in camps.'

The disastrous retreat to the Bataan Peninsula from Manila was the decision of General MacAuthur who installed himself on the offshore fortress of Corregidor and paid one 10 hour visit to his frontline, malnourished troops desperately fighting off superior Japanese forces on the mainland.  MacAuthur was ordered to leave Corregidor and vowed "in another blaze of publicity,  'I shall return.'"  The 'Battling Bastards of Baatan' were left to their fate (see Van Der Vat, D. The Pacific Campaign, 2001 pp. 162-5).

The Dover Patrol was a rag-tag navy of second rate destroyers, fishing boats (drifters), and gun platforms which was tasked with anti U-boat measures, mine clearance and harassment of enemy ports through the fours years of the First World War. Many drifters were commandeered into the patrol to set and maintain extensive submarine netting barriers across the Dover Strait. Out in all weathers and under constant risk of U-boat attack, shore based shelling, enemy aircraft and mines the men of the Dover Patrol served with courage, fortitude and persistence in the long, brutal years of the First World War. Both sides in the conflict suffered appalling and grievous losses (see Humphreys, R., 1998, The Dover Patrol, 1914-18).

The Dover Patrol is remembered in the UK and France by memorials at Leathercote Point near St Margaret's Bay. Similar memorial obelisks stand at Cap Blanc Nez on the French Coast and at Fort Hamilton, overlooking New York harbour. There is also a moving memorial at Tower Hill in London that commemorates 35,748 men and women of the Merchant Navy and Fishing Fleets who died in both World Wars and who have no known grave.

'Sailor' is not a likeness of my father.  But as kids we liked to play with his old white US Navy sailor's cap  (which replaced the straw hats of the summer uniform in 1886 and was known variously as the 'dixie cup', the 'squid lid, and the 'dog dish' and over 100 years offered the wearer, through its malleability, the possibility of expressing some measure of individuality in a uniform world (see Hats/Capes US Navy).

In the latter stages of carving I used a photograph of a sailor from the Dover Patrol days to inspire some of the facial features.

As the astute observer will note the 'Dixie Cup' sits too low on the head, or rather, the top of the head is truncated under the Dixie Cup. But that was the log's fault, not mine, as they say.

Monterey Cypress wood has a surprisingly strong smell and even now on a warm morning when I walk into our kitchen, where Sailor has stood for some years, I can smell the wood at work. Long may he last.