Optimisation and a 80MYA Bivalve 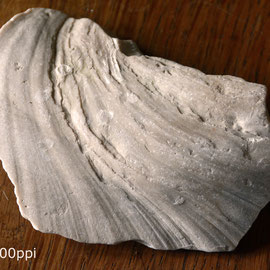 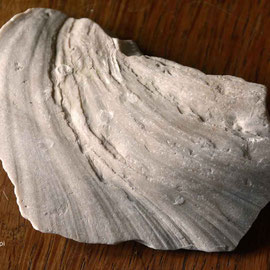 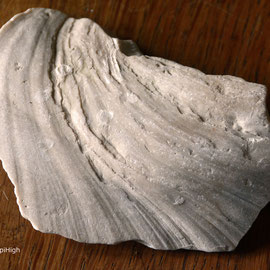 ﻿At this size there is little to choose between them. The 72ppi images seem slightly more luminous. Of course, the advantage of using small images is that they load much faster.

The photo is a piece of fossilised shell I found down on the beach where a massive chalk rockfall is being gradually eroded by the sea down into a solution of chalk and flint shingle.

The shell is part of an inoceramid bivalve that lived in the warm seas that created the chalk about 80 million years ago. These bivalves were the clams and mussels of their day and could be a metre across.

These huge shells were often colonised by oysters and are sometimes found with the remains of fossilised pearls attached.  There are some marks on the shell fragment I found to suggest something was attached to it.

Below is a piece of flint with fossilised shell fragments embedded in it. The flint must have formed around the bivalve shell. How does that happen, then?

'Although flint is inorganic, the silica that formed it was originally sourced from the remains of sea sponges and siliceous planktonic micro-organisms (diatoms, radiolarians). Flints are concretions that grew within the sediment after its deposition by the precipitation of silica; filling burrows/cavities and enveloping the remains of marine creatures, before dehydrating and hardening into the microscopic quartz crystals which constitute flint' (see Discovering Fossils: Dover).